A capacity field of stayers does battle at Royal Randwick on Saturday in the Group 1 $750,000 The Metropolitan (2400m) where top mares Montefilia and She’s Ideel are tipped to break the female hoodoo in the mile and a half classic. 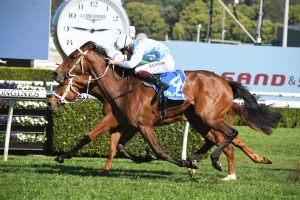 Montefilia is well-backed to win The Metropolitan 2021 in Sydney this weekend. Photo: Steve Hart.

Since the Gai Waterhouse-trained Coco Cobanna in 2000 no mare has won The Metropolitan Handicap.

The danger following closely at The Metropolitan odds of $6 is the Bjorn Baker-trained She’s Ideel, the duo having run the quinella in the Group 3 Kingston Town Stakes (2000m) at the track last time out.

Montefilia was brave with the bigger weight when second that day and the Kermadec four-year-old is now tipped to turn the tables from a wide gate 17 draw in the Group 1 on Epsom Handicap Day with Hugh Bowman retaining the ride.

She’s Ideel is also wide in gate 16 with Jason Collett partnering the six-year-old daughter of Dundeel whose first Group 1 assignment only came in April’s Group 1 Tancred Stakes (2400m) when she finished second to Sir Dragonet.

A Sydney Cup fourth over the two miles followed before her three eye-catching returns this campaign when third to Mo’unga in the Group 1 Winx Stakes (1400m), luckless Group 2 Chelmsford Stakes (1600m) seventh midfield with excuses and the Kingston Town Stakes win on September 18.

It is the Kingston Town Stakes form tipped to stack up in the tougher event on Saturday with the Gai Waterhouse & Adrian Bott-trained third placegetter Entente the current $7.50 The Metropolitan third elect.

A five-year-old son of Dundeel, Entente already franked the form winning his start in The Metropolitan field for eight-time winning trainer Waterhouse via the Group 3 Colin Stephen Quality (2400m) at Rosehill last Saturday.

Railings (2005) was the last horse to complete the Colin Stephen Quality – The Metropolitan double, but there’s money for Entente to be the next as the galloper goes down from 56.5kg to 52.5kg on the seven-day turnaround.

The only other last start winner in The Metropolitan line-up this season is the Group 3 Newcastle Gold Cup (2300m) champion Great House for Chris Waller.

Great House was ridden to victory in the Newcastle Gold Cup field by 51-year-old Jeff Penza who saluted in all three of the Group 3 races that day.

Penza retains the ride on the horse in Saturday’s Group 1 on just 52kg, the hoop chasing his maiden Group 1 winning ride.

“I haven’t really ever aimed for a Group 1 win,” Penza told Racenet this week.

“People see where I ride every weekend but every now and then an opportunity like this pops up.

“Something similar happened with Sons Of John. He ran third in an Epsom (behind Winx in 2015).

“I’ve had to wait a few years for another Group 1 ride, and I’ve got a couple so I’m very excited.”

The Epsom Handicap (1600m) and Flight Stakes (1600m) are the other two Group 1 races on the Randwick race card this Saturday in Sydney.