Two of the top three fancies for Saturday’s Group 1 $1.5 million Epsom Handicap (1600m) will have to do it from out wide with both Mo’unga (13) and Riodini (17) drawing double-digits in the mile classic. 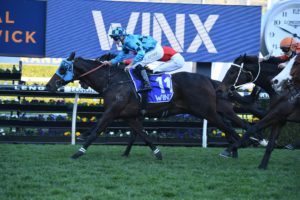 Winx Stakes winner Mo’unga is one of the key runners in the 2021 Epsom Handicap field this Saturday. Photo: Steve Hart.

One of three elite level features on the Royal Randwick race card this weekend, the Epsom Handicap field attracted 17 horses and it is Riodini ($5) narrowly leading the latest markets at Ladbrokes.com.au.

The Gai Waterhouse & Adrian Bott-trained Proisir five-year-old has work to do from out wide, but carries just 51.5kg.

It is a nice drop from the 59kg he carted to a brave second behind nine-time Group 1 winning mare Verry Elleegant last time out in the Group 1 George Main Stakes (1600m) at the same track and distance.

That run along with his devastatingly close second to Think It Over two back in the Group 2 Chelmsford Stakes (1600m) also at weight-for-age suggest Riodini could be in for a big run with the light weight in the Epsom Handicap.

The former New Zealand-raced galloper chases his first victory down under and looks to break a drought extending back to December of 2019.

The autumn’s Rosehill Guineas winner was excellent fresh defeating Verry Elleegant in the Group 1 Winx Stakes (1400m) and could return to Sydney third-up following his brave second to Incentivise in the Group 1 Makybe Diva Stakes (1600m) at Flemington last start.

Mo’unga also holds a nomination for the Group 1 Turnbull Stakes (2000m) at Flemington this weekend, final acceptances for which close on Wednesday.

Sitting between Riodini and Mo’unga in the markets is Chris Waller’s class Frankel mare Hungry Heart ($6.50) in barrier 10 with Kerrin McEvoy continuing associations.

Waller meanwhile has won four of the eight previous editions of the time-honoured feature, most recently in 2019 with Kolding.

Hungry Heart won the Group 1 Vinery Stud Stakes (2000m) – Group 1 ATC Oaks (2400m) double over further during the autumn and looks in a similar vein of form this time in after her George Main fourth last time out.

The in-form duo of Atishu ($16) and former Singapore galloper Aramayo ($13) who ran first and third respectively in the Group 3 Bill Ritchie Handicap on September 18 are the other best out of Waller’s five Epsom Handicap runners this season.

Rounding out the single-figure fancies meanwhile at $8 is the Brad Widdup-trained Icebath, the five-year-old daughter of Sacred Falls carrying 52kg from barrier 14 with Robbie Dolan in the saddle.

Runner-up at the track and distance to Cascadian in the Group 1 Doncaster Mile in the autumn, Icebath has had three runs this prep and looks rock hard fit fourth-up on the quick turnaround after her fourth to Vangelic in last weekend’s Group 2 Golden Pendant at Rosehill.

Godolphin’s Doncaster Mile winner Cascadian is also in the mix on Saturday but goes up 3.5 kg on the weight he carried to victory then with 56.5kg and Hugh Bowman riding in the Epsom.

The other Group 1 features on the Epsom Handicap Day card for Saturday are The Metropolitan (2400m) and the Flight Stakes (1600m).