Connections of the Robert Heathcote-trained Startantes are hoping that paying a late entry into the Group 1 $750,000 Darley Flight Stakes (1600m) is rewarded this weekend at Royal Randwick. 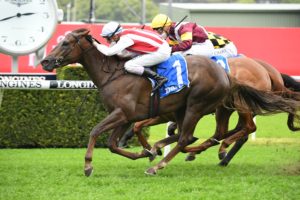 Four Moves Ahead is one of the top fancied fillies in Saturday’s 2021 Flight Stakes field. Photo: Steve Hart.

A field of 16 three-year-old fillies are accepted for the Flight Stakes on Epsom Handicap Day including the progressive Startantes who was not originally nominated for the mile showdown.

She caught the eye at Rosehill last Saturday however coming from well back in the field to finish a brave sixth behind In The Congo in the Group 1 Golden Rose Stakes (1400m).

The step-up to the mile should suit the up-and-comer who has won five from nine to date and she currently sits top of the Flight Stakes odds at $4 through Ladbrokes.com.au to salute from barrier six with Sam Clipperton in the saddle.

An early market mover, the Gerald Ryan & Sterling Alexiou-trained Not A Single Doubt filly has been progressing well throughout the Princess Series most recently running a close second in the Group 2 Tea Rose Stakes (1400m).

This year looking to be the next to salute in both races is the John Sargent-trained Four Moves Ahead ($4.80) who has work to do from out wide in barrier 13.

Heading to the breeding barn, Four Moves Ahead is looking to increase her value as a broodmare securing a Group 1 win after coming close in the autumn when the best of the fillies (4th) in the Golden Slipper Stakes as a two-year-old.

“It would be a good race to win, especially for (owner) Jonathan Munz. He’s into his breeding,” Sargent told RS NewsWire this week.

“It will make her a very valuable broodmare when she retires, so it would be a really good one to tick, a Group 1 with her.”

Sargent believes the 1600m won’t be an issue with the filly’s breeding suggesting the mile will suit.

“Her half-sister Emeralds won the Angst at Randwick over a mile and this filly has shown exactly the same sort of attributes, so I don’t think it will be a worry,” he said.

That was her first in partnership with Adrian Bott and the stable saddle-up two runners in this year’s Flight Stakes field with Never Been Kissed and Swift Witness.

Tim Clark rides Silver Shadow winner Swift Witness from gate eight, the filly out to improve on her third in the Tea Rose Stakes only a half-length beaten from a wide gate (11 of 12) in the traditional Flight Stakes lead-up.