A field of returning spring stars plus a number of in-form fit dangers including the defending champion Behemoth do battle at Caulfield Racecourse on Saturday in the Group 1 $1 million Memsie Stakes (1400m). 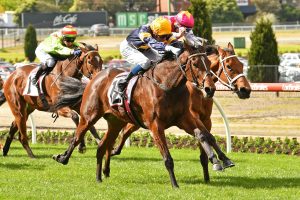 It is shaping-up as an outstanding edition of the opening Melbourne Spring Racing Carnival Group 1 where the David Jolly-trained Behemoth attempts to go back-to-back for the first time since the great mare Sunline (2000-01).

He won the Group 3 Spring Stakes at home in Morphettville last year before claiming Caulfield’s Memsie Stakes – Sir Rupert Clarke Stakes double and comes off a first-up victory in the same lead-up this season.

Behemoth narrowly saluted for the punters fresh on August 14 and is tipped to get the job done again sitting top of the latest Memsie Stakes odds at Ladbrokes.com.au at $4.20.

Connections are on a last-minute hunt to secure a jockey for the Memsie Stakes favourite however after Linda Meech was one of hoops caught up in a quarantine breech and subsequently forced into a 14-day quarantine.

It is the same story with the spring carnival thrown into doubt for jockey Ben Melham who was to ride the rails-drawn Beau Rossa in the Memsie Stakes field on Saturday.

Trainer Will Clarken has made a late change for his in-form Unencumbered four-year-old, narrow runner-up behind Behemoth in the Spring Stakes last start, with Beau Rossa now to be ridden by Linda Meech.

Along with Behemoth, the other best in Memsie Stakes betting this season at a current quote of $4.50 is Tofane, a specialist over the distance (4:3-1-0), in gate four with Craig Williams aboard.

Williams is tipped as the hoop most likely to replace Glen Boss, forced to return to Sydney after being denied entry into the Northern Territory’s Howard Springs centre despite having originally been accepted to do so and flying to Darwin, aboard Melbourne Cup favourite Incentivise.

Ocean Park six-year-old Tofane and Williams combined for a stellar finish to the winter in Brisbane taking out the Group 1 Stradbroke Handicap – Tattersall’s Tiara double over 1400m at Eagle Farm.

The mare races for the first time since in the Memsie looking to break her first-up hoodoo not having won fresh in her five previous attempts.

The other best in Memsie Stakes betting this season include the Murray Baker & Andrew Forsman-trained Hobartville winner Aegon ($9.50) looking to atone for his disappointing Doncaster run back in April and the Danny O’Brien-trained Railway Stakes winning mare Inspirational Girl ($7) having her first run outside of Perth.

There’s also been an early market move on the ultra-consistent Sierra Sue ($13 into $10), Trent Busuttin & Natalie Young’s Darci Braham mare having won the Mildura Cup before a last start Group 2 P.B. Lawrence Stakes victory at the Memsie track and distance on August 14.

“There’s no reason why she couldn’t (win) but she’s up against the big boys this time,” co-trainer Busuttin told the Herald Sun.

“She’ll have improved off her last run, but she’s got a beautiful draw (barrier five) and we’re really happy with her.

“She’s got a good turn of foot and she can sustain it.”

The Memsie Stakes is scheduled to run as Caulfield Race 8 at 4:45pm (AEST) on Saturday.