The David Jolly-trained Behemoth was too strong late outmuscling his rivals to go back-to-back in an exciting edition of Melbourne’s Group 1 $1 million Memsie Stakes (1400m) at Caulfield Racecourse. 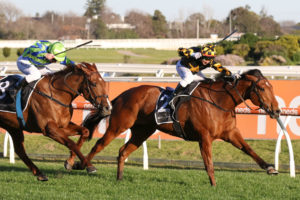 Elite level racing in Victoria for the spring got underway in the form of the Memsie Stakes and saw All Too Hard six-year-old from South Australia, Behemoth ($3.20), score successive editions of the race for the first time since the brilliant mare Sunline (2000-2001).

Further franking the Spring Stakes form was the consistent Will Clarken-trained four-year-old Beau Rossa who ran a narrow second in both it and the Memsie Stakes putting in a huge effort in the latter as an 11/1 shot.

The beaten favourite in the Memsie, Michael Moroney’s resuming Group 1 Stradbroke – Tiara double winning mare in Brisbane from the winter, Tofane ($3) also lost few admirers in her close third beaten only three-quarters of a length.

It was a perfectly executed ride by Brett Prebble in the Memsie Stakes, the comeback hoop picking up the mount in the eleventh hour after Jamie Kah lost the ride after her COVID-19 breech.

As it turned out, second placed hoop Linda Meech was also not originally slated for the Beau Rossa ride before Ben Melham was also forced into quarantine having been caught up in the same saga this week as Kah.

“It’s a good feeling,” Prebble told the media after his Group 1 winning ride.

“That was pretty special.”

Prebble travelled around fifth one off the fence the early stages before coming three-wide around Tofane who was tracking in fourth as they turned for home.

Tofane lost a little momentum as Prebble forced her and her hoop Craig Williams into a pocket, muscling his way into the ideal spot on the home straight to charge down the front runners.

Behemoth moved past the leader Sansom inside the final furlong and went on to hold off a fast-finishing Beau Rossa, while Tofane crossed a brave third.

“I reckon he needed a run…he couldn’t go any faster the poor bugger so I reckon he’ll really come on from that,” Prebble said.

“He’s a big robust horse, they’re going to have a lot of fun with him.”

The likely next-up option for Behemoth is another Group 1 title defence in the $1 million Sir Rupert Clarke Stakes (1400m) back at Caulfield on September 18.

He carted 60kg to victory in that event last spring, but will need to be good with likely even more weight this time around.

Behemoth is into $6 in pre-field Sir Rupert Clarke Stakes betting markets at Ladbrokes.com.au.

She is currently the $5.50 co-favourite Ayrton who also resumed with a win in the last at Caulfield on Saturday.