The $5 million Ladbrokes Cox Plate is now on the spring agenda for the Danny O’Brien-trained Superstorm who broke his winning drought in Saturday’s 2021 Feehan Stakes at Moonee Valley. 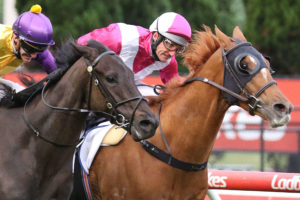 Superstorm is into the Ladbrokes Cox Plate after a narrow win in the 2021 Feehan Stakes. Photo: Ultimate Racing Photos.

The former Perth-trained galloper earned a ballot exemption into the Group 1 Cox Plate (2040m) back at The Valley on October 23 with a narrow victory up the inside in the Group 2 $500,000 Feehan Stakes (1600m).

Jockey Damien Oliver celebrated is fourth win in the mile feature, sticking to the inside alley when given no option but to hug the rails in a tight finish.

It was a master rails-hugging ride three back the fence from Oliver who was rewarded for sticking to the inside as the winning route opened up for him with John Allen moved out on the Group 2 P.B. Lawrence Stakes winning mare Sierra Sue.

Superstorm was also good improving second-up off his P.B. Lawrence Stakes fourth fresh on debut for O’Brien having been transferred from the WA stables of Grant & Alana Williams.

The previously undefeated race favourite Elephant from New Zealand was in the lead 150m to go in the Feehan before Oliver forced a thrilling photo-finish to get over the top of the brave runner-up in the final stride.

“It was always going to be a bit of a difficult map for him. We haven’t got much gate speed, albeit he took a more prominent position today,” O’Brien told Racing Victoria after the race.

“You definitely would have preferred to be three-wide, peeling and getting momentum particularly on a horse like Superstorm that builds so much through his finish.

“He had nowhere to go and as they straightened, he’s gone back to the fence which hasn’t been the place all day and he’s still been able to lift him and just get there on the line.

“I don’t think there was much in his favour today and he still got there and he’s second-up today from nearly a year off so the win was full of merit.

“He’s a horse that’s always raced at the top level and he hadn’t won for a while so it’s great to get back winning with him.

“We knew there would be good improvement from his first up to today and we were confident the horse would run well but it always looked like it would be complicated and need a D. Oliver special.”

Also good first-up in third to round out the Feehan Stakes trifecta was another Kiwi raider, The Chosen One, for Murray Baker & Andrew Forsman.

O’Brien named the Group 1 $1 million Underwood Stakes (1800m) at Sandown Park Hillside on September 25 as the likely next-up run for the Cox Plate-bound Superstorm this spring.

“(Owner) Bob Peters will decide where he thinks the horse will be best placed next,” O’Brien said.

“I suspect the Underwood looks the next logical run for him in three weeks’ time at the 1800. I think a big track like Sandown will suit too.

“It’s only going to get harder there’s a lot of really nice horses around in Sydney there today so we’re pleased to get on the board today and looking forward to the rest of the spring with him.”

Superstorm is into $12 to win the Underwood Stakes through Ladbrokes.com.au and remains a $51 outside in all-in Cox Plate markets led by the brilliant Zaaki who returned a first-up winner in Randwick’s Group 2 Tramway Stakes.