New Zealander Dark Destroyer is looking to continue his successful raid down under this weekend with the Lance O’Sullivan & Andrew Scott-trained Proisir gelding favourite to take out the Group 1 $1 million Queensland Derby (2400m). 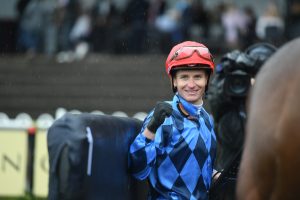 One of three Group 1 features on a bumper ‘Super Saturday’ at Eagle Farm, the Queensland Derby field features a full line-up of young stayers led by the rails-drawn Dark Destroyer.

A winner of four of his nine starts to date including the Group 2 Auckland Guineas (1600m) across the Tasman on New Year’s Day, the in-form galloper is fourth-up in Brisbane this winter and improving each run.

Looking suited to the mile and a half, and getting a firmer track on the weekend with Eagle Farm in the Soft-ratings now, Dark Destroyer looks primed to win again.

The bookies agree and have the Kiwi at current Queensland Derby odds of $4 and firming through Ladbrokes.com.au.

A victory in the Derby would be extra special for co-trainer O’Sullivan, the former champion hoop having ridden his father’s 1992 Queensland Oaks – Queensland Derby double winning filly Royal Magic to victory 30 years ago.

“It is a long time ago now,” O’Sullivan told Punters.

“She was a pretty handy filly.

“We had a lot of success in Australia, there were a lot of good horses – dad had a stable full of them at the time.

“He always trained out of New Zealand, we travelled them over. He is 88 now but the marbles are still all there.”

As for Dark Destroyer on Saturday, O’Sullivan is quietly confident the favourite can get the distance and salute.

“He was a pretty handy horse here in New Zealand, he was the favourite for the Derby here and we are unsure what happened. He got cast in the box so that’s what we put it down to, he has spent quite a bit of time out,” he said.

“Hindsight is a great thing because all of a sudden, he doesn’t have all the mileage here in New Zealand and he went over there (Brisbane) fresh.

“We ran out of time a bit, we didn’t have a chance to give him a barrier trial here, but I thought his first run was adequate for knowing where he was in his preparation.

“He covered ground in the Rough Habit and it was encouraging for us because we had never run him further than the mile in New Zealand.”

Chris Waller’s Rough Habit runner-up Paternal presents as the danger again on Saturday, the Savabeel gelding occupying the second line of Queensland Derby betting at $6 to turn the tables.

Also drawn well near the inside with gate three for Hugh Bowman, Paternal is out to hand Waller a third Queensland Derby trophy following the trainer’s previous victories with Hawkspur (2013) and Kukeracha (2021) last year.

Waller has a total of four final acceptors in the mile and a half feature this year with his other most noteworthy contender being Caboche ($9) in gate nine for jockey James McDonald.

Rounding out the single-figure fancies is another New Zealand visitor, Pinarello, drawn the second outside alley for Roger James & Robert Wellwood.

Leith Innes retains the ride on the son of Tavistock having guided him to a runaway 2.5 length win back home last start in a 2100m Group 2, prior to which Pinarello was far from disgraced when fifth in the Group 1 NZ Derby (2400m).

The Queensland Derby 2022 is scheduled to run as Race 8 at 3:18pm (AEST) on the extended 10-race Eagle Farm card on Saturday.