The Group 2 $1.2 million The Q22 (2200m) on Stradbroke Day is next-up for the progressive Peter & Paul Snowden-trained import Huetor after his shock win in the Doomben Cup 2022 results that saw the odds-on elect Zaaki run third.

The fans may have been having a little trouble in pronouncing Team Snowden’s runner, but co-trainer Paul Snowden had a tip.

“Just call him the winner!” he told Thoroughbred Central post-victory.

“It’s culminated this preparation with today and his next run in The Q22.

“He’s been working up to a performance like this today. He takes a little bit of racing to get him there. This preparation is at a very high level whereas last prep he came through his grades and just picked them off one by one.

“He’s won about four races like this. They all leave the fence and he comes up the fence. It was very pretty to watch.

“These city (Sydney) horses coming up here, they don’t know what they are on because they’ve been trudging through the mud the last three months. They are really relishing the conditions today that’s for sure.” 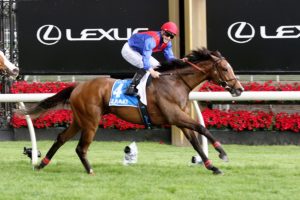 The champ was red hot favourite at $1.24 to successful defend his title over 2100m at Eagle Farm in this year’s rescheduled Doomben Cup, but after looking the goods on the home straight, he weakened to finish a disappointing third.

Chris Waller’s grey mare Polly Grey took up the lead, and jockey James McDonald was able to travel sweetly in second on her outside aboard Zaaki.

Around the bend, Zaaki moved up alongside the front-runner before easily taking the lead 350m out.

Inside the final furlong he looked the winner, ready to go back-to-back in the Doomben Cup after doing the same in the A.D. Hollindale Stakes at the Gold Coast.

But in racing, no thing is a sure thing, and the punters were left in shock as Zaaki was run down by two other imported hopes the closing stages.

After a patient ride by two-time Doomben Cup winning hoop Kerrin McEvoy, French-bred five-year-old Huetor ($16) was able to move up the inside and steal the show with a lovely victory.

In second also coming home well late to run past the beaten favourite was the John O’Shea-trained Maximal ($34).

Zaaki won the Hollindale – Doomben Cup – The Q22 treble last year, but after his lacklustre loss in the second leg, looks unlikely to press onto the $1.2 million feature on June 11.

Despite being a doubtful final acceptor, he remains top of the all-in The Q22 odds online at Ladbrokes.com.au paying $2.70, and jockey James McDonald said the horse’s Doomben Cup performance was solid.

“He’s going really well. He felt really good in the run, he just found that last little bit a bit of a pinch. He’s gone good,” he said after the loss.

Huetor, who relished the dry track to improve on his lead-up Hollindale Stakes fourth placing,  is into $3.20 to emulate Zaaki and complete Doomben Cup – The Q22 double.