Seven-time Group 1 winner Nature Strip has settled for a place for the second time this prep after finishing third in Saturday’s Group 2 Challenge Stakes at Randwick.

The World’s Best Sprinter was installed as the short-priced $1.70 favourite in the 1000m dash but lacked his usual late burst under James McDonald when it mattered most.

The Chris Waller-trained superstar stalked dual Group 1 winner Eduardo right into the straight but was no match for the leader as Nash Rawiller booted home the $2.30 second elect in a gutsy ride to the line.

The surprises didn’t stop there though as a very brave Shelby Sixtysix bolted in along the rail to get up and run third over the final 50m.

The result marked the first time since the 2020 Everest that Nature Strip had finished outside the Top 2, leaving many to wonder if he’s up to defending his crown in the Group 1 T.J. Smith Stakes in a month’s time.

There were excuses for Nature Strip first-up in the Lightning Stakes when he was held up for a run, while a slow jump again cost him a step or two on Saturday.

McDonald said after the race that his run wasn’t bad, but that Nature Strip failed to handle the heavy track like he normally does. 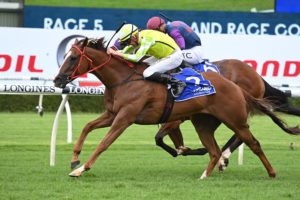 The ride from Rawiller was huge in getting Eduardo over the line, but trainer Joe Pride was critical of some of his decision-making post-race.

“Nash is a man of few words as everybody knows, but a few of the words that he did say, he said, ‘I want to go quicker today.’ I think that was what brought Nature Strip undone but it nearly brought him undone as well.

“There is a delicate balance there. I’m not going to criticise Nash because he gets it right so many times, but it was probably set up for something to come home then. But a gallant effort from my bloke and just great to get him to win another Group race this preparation. He’s a marvel,” Price said.

Eduardo and Nature Strip are likely set for another stoush in the T.J. Smith on April 2, with the $2.5 million sprint likely being the former’s grand final.

“Four weeks to the TJ and then we will think about Brisbane. The Spring is what beckons after that and I’d just love to keep this horse going for as long as I can and he’s showing no signs of tiredness,” Price went on to say.

“He has certainly come up well this time around. The TJ and The Everest are the two big ones and I’d love to see this horse win one of those races before he retires.”