The decision to return with Forbidden Love on the quick backup paid off for trainers Richard and Michael Freedman in Saturday’s Group 1 Canterbury Stakes.

After dominating on the heavy ground last week with a comfortable win in the Group 2 Guy Walter, the stable chose to return to another rain-soaked Randwick track in the hopes of securing a second Group 1 with their talented mare.

The daughter of All Too Hard was quickly inserted as the favourite when Zaaki was scratched earlier in the week, largely due to her impressive 4:3-0-0 record on heavy tracks.

Not surprisingly, the soft conditions under foot suited the four-year-old as Hugh Bowman also scored his 100th Group 1 after having his win aboard Savatiano in last year’s Canterbury Stakes scratched off his resume earlier in the week. 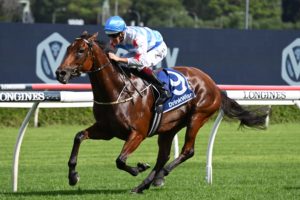 Forbidden Love became the fifth horse to win the Canterbury Stakes as a favourite over the last 15 years. Photo: Steve Hart.

“I was very comfortable from an early part of that race,” Bowman told Sky Racing.

“She is so good into stride and she obviously won with authority on rain-affected ground last week. I just grew in confidence when I took her to the barriers. She was a bit more settled today despite the fact she sweated up a lot, she was a bit more relaxed.”

The champion hoop pushed forward early to make his own luck on speed and found himself with plenty of horse underneath at the 200m mark to race clear.

American import Lighthouse gave chase for second but was still a good gap back to last year’s Surround Stakes winner in tough going.

Forbidden Love failed to run a race on the short turnaround in last year’s Golden Eagle and has often been thought of as a better fresh horse.

The Canterbury Stakes was more of an afterthought following last week’s win, but with the horse in terrific form ahead of her third run back, it was always worth a throw at the stumps.

“She just pulled up so well from last week. I thought, we could wait for the Coolmore and draw 15 and give weight to good fillies coming out of the Surround, so I thought, we may as well roll the dice,” winning trainer Michael Freedman said.

Forbidden Love became the sixth last-start winner to claim the Canterbury Stakes over the last 11 years, as well as the sixth mare to win during the same time frame.

The complete 2022 Canterbury Stakes finishing order can be viewed here.