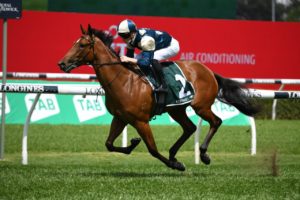 A capacity field of youngsters faces off in the world’s richest two-years-old race this weekend and markets at Ladbrokes.com.au remain narrowly led by Coolangatta at $5.

A three-time winner from as many starts, the highly-spruiked daughter of Written Tycoon races for the first time since her narrow victory as the odds-on favourite in the $2 million Magic Millions 2YO Classic (1200m) at the Gold Coast back in mid-January.

Three two-year-olds throughout history have done the double, but none without a run in between.

Coolangatta however could come into as good as barrier 11 with the way the four emergencies are drawn: Sweet Ride (9), Millane (1), Semillion (18) and Man In The Mirror (4).

The fillies have been dominant in recent years winning five of the past 10 editions of the Slipper.

The other best fancied fillies taking on the colts and geldings in this year’s edition include: Anthony Cummings’ Magic Night Stakes winner from last weekend She’s Extreme ($7); the Gary Portelli-trained Fireburn ($11); one of two Peter & Paul Snowden-trained Russian Revolution fillies in the field Russian Conquest ($13); and 11th-hour inclusion Queen Of The Ball ($17).

She’s Extreme is drawn barrier six with Brett Prebble replacing Tommy Berry in the mount, Berry instead booked to ride Russian Conquest from barrier 16, looking to do the Magic Night – Slipper double for the first time since Kiamichi (2019).

Russian Conquest was brave last time out when fourth in the Group 2 Reisling Stakes (1200m) and is joined in the field by her also widely-drawn stablemate, Revolutionary Miss in gate 17 off a Group 1 Blue Diamond Stakes second in Melbourne.

Queen Of The Ball meanwhile made the Golden Slipper field on Sunday when winning Canberra’s Group 3 Black Opal Stakes (1200m).

Catbird (1999) however is the only runner to win the Black Opal – Golden Slipper double to date.

Of the colts, the best fancied is Sejardan giving Portelli two shots to win the race for a second time after his 2017 success with She Will Reign.

The son of Sebring took his career record to three wins at his fourth start on March 5 winning the Group 2 Todman Stakes (1200m) in the mud and is looking to join the likes of Farnan (2020), Vancouver (2015) and Pierro (2012) as recent winners of the double.

He is drawn well mid-field in barrier seven with the in-form Jason Collett retaining the ride.

The Reisling Stakes winning filly on the same day, Seven Veils for Mark Newnham, ran quicker time on the Heavy (10) track but is only considered a 30/1 shot in Golden Slipper betting after drawing out in barrier 19 (into 15).

Other standouts in the Golden Slipper in 2022 include Kacy Fogden’s unbeaten Snitzel colt Best Of Bordeaux coming off the Group 3 Canonbury Stakes – Silver Slipper double at the track and Blue Diamond winner Daumier in gate eight.