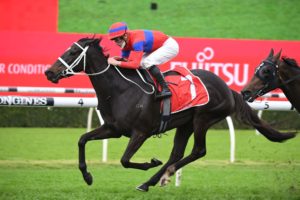 Verry Elleegant is tipped as the one to beat in the wet in Sydney’s 2022 Chipping Norton Stakes on Saturday. Photo: Steve Hart.

The six-year-old daughter of Zed posted her 10th Group 1 success over the two miles in the Melbourne Cup at Flemington in the spring and is tipped to add to that impressive tally on the weekend.

She resumed in the Group 2 Apollo Stakes (1400m) working home well the closing stages on a Good (4) to finish a mid-field seventh behind fellow weight-for-age big gun Think It Over.

Her second-up record is excellent and the difference of an extra 200m in Heavy going has the punters coming for her.

The latest Chipping Norton Stakes betting markets at Ladbrokes.com.au have Verry Elleegant at $3 and firming to win the weight-for-age for the second year.

Waller is a master trainer of Chipping Norton Stakes winners having prepared having won nine in the 11 years since 2011, most famously the four-peat of the iconic Winx (2015-18).

Along with Verry Elleegant, jumping from barrier four with James McDonald aboard, Waller also saddles-up Frankel mare Hungry Heart ($31) who ran fourth in the Apollo and the out-of-form Kolding ($61) as two of the roughies in the Chipping Norton Stakes field.

The other runner getting plenty of love in the markets is the James Cummings-trained Colette who is into $4 third favouritism to also thrive in the muddy conditions of Saturday’s encounter.

Donning the famous Royal Blue silks of Godolphin, Colette jumps one on the inside of Verry Elleegant with Tim Clark retaining the ride on the five-year-old daughter of Hallowed Crown.

Colette is three-from-three on Heavy tracks, but is so versatile having also won the Group 1 Empire Rose Stakes (1600m) during the spring in Melbourne on a Good (4).

For many, her run from the back to flash home into second in the Apollo Stakes was the run on the race and she too will take huge improvement out of that looking ahead to the rematch.

Nash Rawiller rides the consistent son of So You Think who is a genuine Randwick specialist and chases a fifth straight win.

The only query for Think It Over is that rain-soaked Randwick track, the horse having had three previous attempts in the wet without a top three finish.