2022 Australian Cup Field & Betting Update: Punters Like Think It Over

Think It Over is the horse to beat in Saturday’s Group 1 $1.5 million Australian Cup (2000m) at Flemington despite Kerry Parker’s stable ace being unraced in Melbourne. 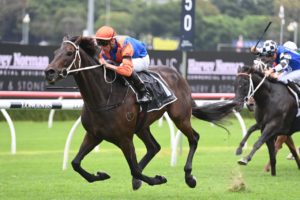 Think It Over is tipped to return to winning form in his first Melbourne run in Saturday’s 2022 Australian Cup. Photo: Steve Hart.

Super Saturday lights up Headquarters this weekend with punters treated to a double-shot of Group 1 autumn racing action including the Australian Cup.

Heading markets on the weight-for-age classic at a firm $3.10 through Ladbrokes.com.au is six-year-old So You Think gelding Think It Over presenting fit and ready to fire third-up.

He was a spring revelation for Parker continuing to exceed expectations with a Group 1 placing behind super mare Verry Elleegant among four of his own victories in Sydney.

Think It Over won again fresh in Randwick’s Group 2 Apollo Stakes (1400m) by a big margin and was excellent when fourth to Verry Elleegant in the Group 1 Chipping Norton Stakes (1600m) last time out on a Heavy (10).

A versatile galloper, there’s no doubt he is better on top of the ground and will get conditions to suit heading south on Saturday for his Melbourne debut.

While yet to race the left-handed way, his 2000m record is brilliant (10:5-0-1) and no doubt he will relish getting out to the distance from barrier four with Nash Rawiller retaining the ride.

Rawiller chases his first Australian Cup victory and is confident he’s on the right horse to achieve that this year and atone for his devastatingly close loss aboard Gai Waterhouse’s beaten odds-on favourite Theseo back in 2009 behind Niconero.

“Racing that way shouldn’t bother him. He’s on a lovely big track at Flemington and it’s not like taking a three-year-old Profondo down there from a wide gate,” Rawiller told Racenet this week.

“He’s got good gate speed and he’s pretty adaptable to most situations I would think.

“He’s been around the traps and I’m sure it will be no problem.”

Three of his rivals are also under double-figures in Australian Cup betting this autumn including the $4.60 second elect Spanish Mission for Peter Moody.

The former UK raider was third in the Melbourne Cup over the two miles in his Australian race debut and has had two subsequent runs after transferring to the Moody stables.

The latest of those was a first-up third to Earlswood in the Group 3 Carlyon Cup (1600m) on February 12 and he’s been kept fresh ahead of his Australian Cup bid looking to hand Moody a second trophy following his 2012 victory with Manighar.

Equal at $8 are then the James Cummings-trained Cascadian donning the famous Royal Blue silks of Godolphin from barrier two and Edward Cummings’ former Queensland Oaks winner Duais looking to return to her better form.

Chipping Norton Stakes runner-up She’s Ideel ($10) is the other mare in the mix looking to be the first female galloper to beat home the boys in the Australian Cup results since the mighty Makybe Diva (2005).

The 2022 Australian Cup is scheduled to run as Flemington Race 7 at 4:20pm (AEDT) on Saturday’s nine-race program.