Star young New Zealand trainer Jamie Richards could be in for a stellar Saturday down under saddling-up two class mares in the top two races in the country – Probabeel in the Cox Plate and Entriviere who starts favourite in Sydney’s $2 million The Invitation. 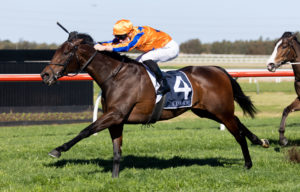 Last start Might And Power Stakes winner Probabeel is at double-figures through Ladbrokes.com.au to defeat Zaaki again when they face off against the likes of Caulfield Guineas champ Anamoe and Chris Waller’s Horse of the Year Verry Elleegant at The Valley in an outstanding edition of the Group 1 $5 million Ladbrokes Cox Plate (2040m).

In Sydney the action at Royal Randwick is headlined by the inaugural running of The Invitation (1400m) that has attracted a classy line-up of 12 fillies and mares.

Entriviere heads The Invitation betting at Ladbrokes.com.au with the ultra-consistent Tavistock four-year-old at $3.

She has a wide alley (11) to overcome with Tommy Berry coming aboard in place of James McDonald who rides in Melbourne on Cox Plate Day.

Entriviere won the Group 2 Sheraco Stakes (1200m) first-up at Kembla Grange before placing third only three-quarters of a length beaten behind Vangelic in the Group 2 Golden Pendant (1400m) in late September.

Kept fresh since ahead of the $2 million feature this weekend, the bookies are tipping the Kiwi to return to winning form and bounce back in The Invitation.

So dominant is Entriviere to take out the first running of the invitation-only event, just two other runners are under double-figures for the upset with Brad Widdup’s Group 1 performer Icebath ($8) and the Queenslander Startantes ($9).

Doncaster Miler runner-up in the autumn, Icebath has a wide alley (15) to overcome on Saturday.

The Sacred Falls five-year-old down in class and distance looking to atone for her ninth when only three lengths off the winner Private Eye in the Group 1 Epsom Handicap (1600m) last start.

Representing Brisbane’s Robert Heathcote, Startantes is the sole filly taking on the older mares in the race.

The three-year-old daughter of Star Turn comes into the event with a 50% winning strike rate after 10 career starts and was good last time out when third in the Group 1 Flight Stakes (1600m).

Prior to that she ran sixth under three lengths off In The Congo at 25/1 in the Group 1 Golden Rose, the form of which has subsequently been franked with the runner-up Anamoe winning the Caulfield Guineas ahead of his Cox Plate assignment this weekend.

Tricky Gal drawn the rails, the talented Chris Waller-trained Nudge and the Golden Pendant winner Vangelic from the Waterhouse/Bott stable are among the other standout female gallopers in the field.

Vancouver four-year-old Vangelic had a tough run when second last (12th) behind Aim at the track on October 9 in the $500,000 Silver Eagle (1300m), but co-trainer Adrian Bott remains confident she can bounce back against the girls in The Invitation.

The Silver Eagle was marred by the tragic race fall of Triple Ace and Vangelic was one of the horses caught up in the interference that led to the catastrophe.

“Vangelic has been good, she hasn’t missed any work and is showing her usual enthusiasm,” Bott told the Herald Sun this week.

“She was severely hampered and was taken completely out of play but (jockey) Tim (Clark) looked after her and eased her out of the race.

“The incident took the wind out of both their sails but fortunately neither the mare nor Tim were hurt.

“She wasn’t galloped on during the incident and was straight back into work the next day.”

The 2021 The Invitation is set to run as Randwick Race 9 at 5:35pm (AEDT) as the penultimate event on the Sydney race card on Saturday.

Full markets courtesy of Ladbrokes.com.au can be accessed here.