A superb ride from Damian Lane saw the Mick Price and Michael Kent-trained Daisies over the line in the Group 3 Ethereal Stakes at Caulfield on Saturday.

The traditional leadup race into the Kennedy Oaks on November 4 featured a bumper line-up of three-year-old fillies, but it was the daughter of Sebring who won her maiden in just her fourth career start.

With punters truck-loading into the short-priced favourite Kapalua Sunset ($2.20), Daisies was left to run around at a cool $10.00 quote following a last-start sixth behind Elusive Express in the Edward Manifold over the mile at Flemington. 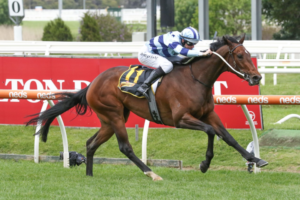 The step up to 2000m for the first time was a big query for most, but Lane proved to be the difference as the winning hoop took up the lead at the 800m mark with the rest of the tightly packed field running slowly.

From there, Daisies’ brilliant turn of foot did the rest as the pair went for it 200m out from home to win by 1.5L.

“He was smart enough to know how stupidly slow they were going and cease the race,” winning trainer Mick Price said of Lane’s ride.

He was deep early, I thought it was a big tick for Damian Lane. She’s a beautiful clean-winded staying filly, and I would say she’ll go into the Oaks from here.”

Daisies was originally a $15 chance in the Ladbrokes Kennedy Oaks market but has now firmed into the $7.00 second-elect behind Wednesday’s Thousand Guineas winner Yearning ($6.00).

Big questions are now being asked of Kapalua Sunset, however, after the favourite was seen going backward rounding the turn.

The Danny O’Brien-trained filly has drifted from $4.80 out to $8.00 in the market, while second place-getter Glint of Hope remains steady at $15.00.

The 2021 Kennedy Oaks market courtesy of Ladbrokes can be viewed here.