The proven two-miler led all the way to take out the second Group 1 on Day 2 of The Championships, in large part due to Rachel King’s elite tactics aboard the firming $7.50 chance.

The seven-year-old son of So You Think mapped to settle on speed, and it didn’t take long for him to find the front after getting away quickly from the inside draw.

As expected, King upped the tempo with 800m left in the race, a decision that brought a few horses off the bridle to leave only Knights Order and Sheraz in a dash to the line.

Chris Waller’s French import looked to have plenty left in the tank when looming late, but Waterhouse’s co-trainer Adrian Bott said after the race that he was always quietly confident Knights Order could fend him off.

“He (Sheraz) put the pressure on us early, but I was confident with the work we’ve done and the sectionals he was able to get throughout. When Rachel was able to quicken and doing so nicely, I was pretty confident from that point,” Bott told Sky Racing.

Knights Order saw plenty of late support before the jump, largely due to his strong wet track form and the fact he was proven over 3200m after winning the Brisbane Cup last winter by nearly five lengths at Eagle Farm. 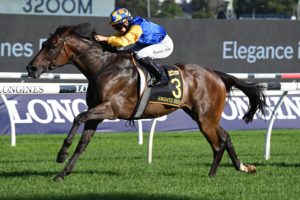 Bott said after the race that the quick turnaround didn’t see him come up quite as well during the spring, but that his three runs leading in were full of merit.

“He loves the conditions so I was really confident with him coming in regarding that,” Bott said.

“He had a great leadup building towards this particular race and he’s had plenty of miles, he’s proven over the two miles before as Brisbane Cup winner, so I was confident on a lot of fronts there. When Rachel was able to dictate the way she did, it was a really calculated ride by her so she’s take a lot of credit for that, she was able to give hime every chance and he was very strong.”

The Irish import only faded late when running second to Nerve Not Verve in the Group 2 Chairman’s Quality last week, a run he was sure to improve on getting out over further from a much kinder gate.

The decision to race on the quick backup also signaled plenty of intent from the stable, while Bott went on to say that his breeding had a lot to do with his success.

“He’s purchased out of Europe and they’ve obviously got the superior staying bloodlines coming down here,” Bott said.

“He was purchased out of there two years ago, he’s taken a good 12 months to acclimatise but I think we saw the potential there with his win in the Brisbane Cup.”

Gai Waterhouse won the Sydney Cup back in 2014 with The Offer.

Sheraz held on to finish second, while Daqiansweet Junior did well to run a place after racing three-wide the trip.

The complete 2022 Sydney Cup finishing order can be viewed here.