Think It Over will go down in the record books as one of the greatest ever boil-over winners after claiming Saturday’s Group 1 Queen Elizabeth Stakes – a race many regarded to be the best of the century, if not all-time.

The race was run as many expected with Zaaki pushing forward under Jamie Kah, who led the field rounding the turn before things got very interesting thanks to the tactics of Nash Rawiller.

The winning jock drew clear from midfield but instead chose to shift out to the wide running rail – a move that proved the difference as Think It Over drew level with Zaaki with 50m to spare. 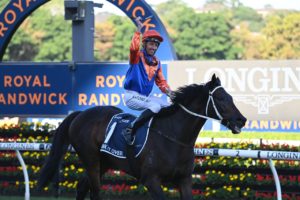 Think It Over became the first double-digit winner of the Queen Elizabeth Stakes since Reliable Man in 2013. Photo: Steve Hart.

A late lunge at the line saw the pair come out on top, and when asked on his decision to defy the pattern of the day, Rawiller said it was all a plan.

“I trotted down the outside fence going to the barriers earlier in the day and I thought I’ll keep this up my sleeve for later,” Rawiller told Sky Racing.

“We just tried to keep him in clear ground and I thought he was going to run second, but he hit a fresh patch of grass and away he went.”

Think It Over had plenty of support last time out in the Tancred Stakes but was never really a factor after being held up at the top of the straight.

His heavy track form and the class of Saturday’s field explained the price on offer, but with three wins over 2000m to his name – and a runner-up to Duais in the Australian Cup the start prior – there’s no question he may have been over the odds.

“The reason why he was odds like that is the conditions and it’s just a funny thing how it worked,” Rawiller went on to say.

“When I straightened I thought ‘it’s worth a go’ to get to the outside. I just felt it’s where the ambulances drive and all the tractors run up the outside fence. For my bloke it was like going from a heavy 9 to slow 6 which he can handle. When he can handle the track he does that, he’s a very good horse.”

The surprises didn’t stop there as Mount Popa went on to grab a place paying $10,00m while Zaaki was unlucky to be denied a fourth Group 1 but certainly lost no admirers racing on heavy going for the first time.

The 11-time Group 1 winner looked headed for a trip to France to contest the Prix De L’arc De Triomphe later in October should she have won on Saturday, but retirement may now be an option for Chris Waller’s mighty mare.

Tommy Berry said after the race that the son of Street Boss never handled the heavy going and was lost confidence between the 400m mark.