2022 Queen of the Turf Stakes Results: Nimalee Adds to Rough Day for Punters

The boil-overs continued at Royal Randwick on Saturday with Matthew Smith’s mare Nimalee taking out the $1 million Queen of the Turf Stakes over the mile.

The daughter of So You Think went around at $31.00 with Ladbrokes in the fillies and mares feature, only to showcase a devastating turn of foot in the concluding stages to race past the leader Annavisto.

A patient ride from Damien Oliver, who won the Queen of the Turf in 2016 aboard Azkadellia, did the trick as the pair settled two back from the speed before pouncing with just under 300m to race.

“We hadn’t been making up a lot of ground so I wanted to be a bit more productive from the start. We had a good draw so just hold position,” Oliver told Sky Racing.

“This mare, she’s always very consistent around the place but found it hard to win but she loved the conditions today, traveled good in the box-seat, and gave me a good kick.”

The price on offer was largely due to Nimalee’s record on rain-affected going, but she did look set to peak in her third run back after running second in the Newcastle Newmarket on a heavy 8 and fifth in the Emancipation Stakes over further with a trial in between runs. 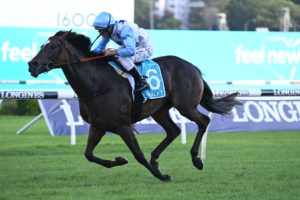 Nimalee also ran fourth to Saturday’s rival Colette over the mile in last year’s Empire Rose Stakes at Flemington, a run that indicated to Smith her potential at the top level.

Not for lack of trying mind you, we’ve had a few swings but I said to Damien the day before the race that it’s about time we won in Sydney,” Smith went on to say.

“She raced really well in Melbourne last prep and was fourth in a Group 1 not beaten far. We knew she was right up with these mares, it was just a matter of getting conditions right.”

Annavisto held on second, while Icebath again managed to run a place for the fourth time at Group 1 level after finishing off for third in last week’s Doncaster Mile.

There was no such luck for Godolphin, however. The blue colours capped off a disappointing day with race-favourite Colette running a distant last after pulling tip at the top of the straight.

The complete 2022 Queen of the Turf Stakes finishing order can be viewed here.