My Whisper is the filly to beat in Saturday’s Group 1 $502,250 Australasian Oaks (2000m) in Adelaide as the Peter & Paul Snowden-trained daughter of Frankel chases her fifth win on the trot. 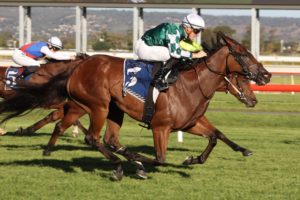 The Peter & Paul Snowden-trained My Whisper is firm favourite in 2022 Australasian Oaks betting for this weekend in Adelaide. Photo: Jenny Barnes.

The punters are coming for My Whisper to extend her winning streak in her biggest test to date with the gun three-year-old continuing to rise in class and distance.

Her only loss was a seventh on debut at Geelong last September and she has been the picture of consistency since.

My Whisper had her first Group assignment on April 9 and was good defeating fellow Oaks hopes Bon’s A Pearla and Mac ‘N’ Cheese home in the Group 3 Auraria Stakes (1800m).

Saturday sees her look to complete the double for the first time since Sopressa in 2018 and the markets suggest she can.

After opening at $4.40 in Australasian Oaks betting at Ladbrokes.com.au she has firmed into $3.80 and gets the run of the race from a soft barrier three draw with Jamie Kah aboard.

Only two other fillies in this year’s capacity Australian Oaks field are also under $10 for the win with Daisies ($9) out wide in gate 17 and the aforementioned Auraria Stakes runner-up Bon’s A Pearla ($9.50) out to turn the tables from a favourable gate five draw.

The Mick Price & Michael Kent Jnr-trained Sebring filly Daisies is in great form presenting fit fourth-up back against her own kind after finishing third against the boys as the beaten favourite here at Morphettville in the Listed Port Adelaide Guineas (1800m).

Prior to that she defeated Bon’s A Pearla at The Valley in the Group 3 Alexandra Stakes (1600m) and the 2000m looks a non-issue based on her close fifth last November in Flemington’s Group 1 VRC Oaks (2500m).

Bon’s A Pearla meanwhile looks the definite value, Kevin Corstens’ perennial place-getter coming off a string of close calls including a third behind Hitotsu in the Group 1 Australian Guineas (1600m) at 60/1 back in March.

There are also plenty of lesser-known fillies putting their hands up for a shot at the title including Fortunate Kiss for Warrnambool horseman Daniel Bowman.

Luckless in the spring when fifth to Yearning in the Group 1 Thousand Guineas (1600m), this prep has seen the daughter of Divine Prophet record a win and three fourths.

She’s rated a $21 shot for Saturday and Bowman is quietly confident her luck will change on the weekend.

“She’s been one of the unluckiest horses I’ve ever trained,” he told the Herald Sun.

“I thought she should have won the Thousand Guineas.

“She was building into running the quickest sectionals of the race when she got knocked over but she had the hide to pick herself up again and finish off.

“She hasn’t had a hell of a lot of luck this prep either.

“She probably blew out in the last 100m.

“I backed her in on class to get away with it and I wasn’t far off the mark because she was only beaten half a length.”

The only query is the 2000m distance, which Fortunate Kiss sees for the first time in the Oaks.

“We just don’t know,” Bowman admitted when asked if the filly would see out the trip strongly.

“She’s drawn a good barrier and will get every chance to run it out.

“That will stand her in good stead to be a top five chance I hope.”

The Australasian Oaks is set to run as Morphettville Race 7 at 3:32pm (ACST) as the highlight on the nine-race card kicking off Group 1 racing this Adelaide Autumn Racing Carnival.