Godolphin are left weighing up their options after seven-year-old gelding Cascadian took out Saturday’s Group 2 Peter Young Stakes at Caulfield.

The son of New Approach was installed as the odds-on favourite in the small field of six after running third first-up in the Group 1 C.F. Orr Stakes a fortnight ago.

The British import found the box-seat early under Damien Oliver, stalking leaders Yonkers and Delphi before unleashing a powerful turn of foot to race past at the 100m mark.

“He’s not the most brilliant gate horse and I know that,” Oliver told racing.com.

“I wanted to be a little bit positive but I didn’t want to take him out of his comfort zone. I was expecting to lead, but I thought I’d end up in the box seat and I did.”

Cascadian went on to win by half a length in the end, but despite the short price on offer, he was still a slight query racing over 1800m for the first time. 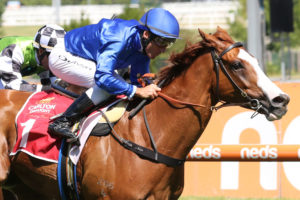 Cascadian remains on the first line of betting ahead of both the All-Star Mile and the Australian Cup. Photo: Ultimate Racing Photos.

A step back to his preferred trip does look idea, but the consistent galloper also owns a nomination in the Australian Cup (2000m) on March 12 at Flemington.

Ollie, who rode Cascadian in the Toorak Handicap and the Cantala Stakes two years ago, was reluctant to say he’d improved much, but he did credit the horse’s consistency.

“He’s always been a consistent performer but he often finds one better.

He’s a genuine horse and to me, that’s the best he’s felt to me today. I just think the mile to 1800m is the perfect trip for him,” Oliver said.

Cascadian has firmed from $7.00 into $6.00 in Australian Cup betting, while he can also be found at $8.00 in Ladbrokes’ All-In All-Star Mile market.