The money proved right at Royal Randwick on Saturday as the Richard Litt-trained Profondo won the $1 million Spring Champion Stakes as the short-priced favourite.

Having just his third career start, the lightly-raced colt out of Deep Impact went around as the $2.80 favourite in the three-year-old feature following a last-start second in the Gloaming Stakes – a form-line that has often stacked up well.

In what was a wide-open field of 13, winning jockey Robbie Dolan found himself with a job to do after drawing wide in barrier 10.

The pair were caught wide early on but traveled well into the straight before finding fifth gear to pull away and win by over two lengths.

Profondo stamped himself as a horse to watch when he won on debut on the Kensington track last month, while his narrow runner-up to Head of State in the Gloaming showed he might just be a Group 1 winning stayer in the making. 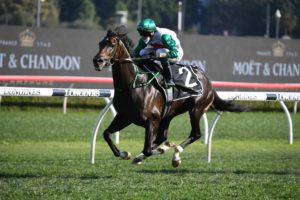 Profondo will now head for a spell in time for bigger races in the autumn. Photo: Steve Hart.

“He’s left me speechless. We’ve had a wonderful two weeks with him,” trainer Richard Litt said.

“We have come here today, he was very relaxed, and gee the world is his oyster. It’s scary. We’re very excited.”

Robbie Dolan also had plenty to celebrate riding his first Group 1 win following a day to forget at Randwick last week in both the Epsom and the Metropolitan.

“I don’t know what to say. First of all thanks to the owners for keeping me on the horse today because they could have put anyone on him. I can’t even speak,” Dolan told Sky Racing.

Profondo appears set for a very bright future ahead, but Litt is happy to send him back to the paddock to polish him up for bigger races next autumn.

“He will go to the paddock now I think,” Litt went on to say.

“He will have a nice spell and we are going to have a big attack come the autumn. He’s got some amazing races coming up. He’s very exciting.”

Never Been Kissed, who was racing on the seven-day back up following her boil-over win in the Flight Stakes last week, was equally as impressive holding on for second after setting the tempo up front.

Alegron peaked late to fill the minors, while there was no luck for the Godolphin-trained Head of State, who finished at the tail.