The Peter and Paul Snowden-trained Aim has produced a huge first-up effort at Randwick to claim the $500,000 Silver Eagle.

The speedster by Star Witness wasn’t fancied in the Ladbrokes market as a $31 shot but managed to find the perfect split between Count de Rupee and Ellsberg down the straight to win narrowly on the line.

The four-year-old was having his first run back since finishing off only fairly for seventh in the Fred Best Classic at Eagle Farm earlier in May and showed plenty in a couple of recent trials to suggest he could run a cheeky race. 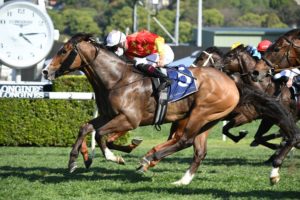 A firm track was also to Aim’s liking, while the class of Hugh Bowman took care of the rest.

“Well, we all know what he is capable of. He just needs things to go his way a little bit and then he can deliver,” Bowman said after the win.

“Today things went his way but he’s a quality horse and we’ve seen him do it at this level and better before.”

Aim was installed at triple-figures in Ladbrokes’ All-In Golden Eagle market but has now firmed significantly into $15.00.

With improvement to come, punters can take confidence in the fact he is a two-time winner second-up, while the step up to 1500m looks ideal for him based on his big finish on Saturday.

“We are getting into uncharted territory with him as far as the distance goes but I suppose we have got to really think about it. He is in the race, qualified now, and it’s certainly going to be interesting.” Co-trainer Paul Snowden told Sky Racing.

The short-priced favourite Ellsberg did well to fill the minors, while Count de Rupee made up big ground after finding himself caught deep early on.