Paulele extended his unbeaten streak at Randwick to four in a row on Saturday with an impressive victory as the short-priced favourite in the Group 2 Roman Consul Stakes.

The lightly raced Godolphin colt got into as short as $1.90 with Ladbrokes bookmakers and raced every bit like a sure-thing when he let down out wide with 200m to spare. 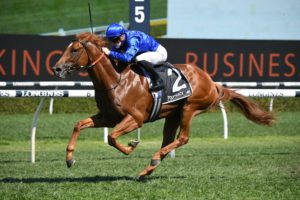 Paulele could potentially return on the seven-day backup in next Saturday’s $15 million Everest race at Randwick. Photo: Steve Hart.

The son of Dawn Approach kept finding through the line, winning by a comfortable 1.5L margin thanks to another patient ride from James McDonald off the speed.

“We set the horse for the Roman Consul. As we’ve stated in the past we have a lot of confidence in the colt,” winning trainer James Cummings said afterward.

“He’s won it in good style. There was a bit of pressure on him being the short-priced favourite. He had the wide run and put himself into the race.”

Fitter for three runs back, Paulele always measured up nicely to secure a third black-type win following a couple of placings over shorter in the San Domenico and the Heritage Stakes.

From here, the three-year-old looks to have options, with Cummings not ruling out a start in The Everest next week, or potentially the Coolmore Stud Stakes at Flemington on October 30.

“He’ll be competitive in The Everest on the seven day back up I’m sure. The Manikato is an option for him and so is the Coolmore,” Cummings said.

“The winner of this race tends to be a very good lead up to the Coolmore every year. They always run well. He’s knocking on the door to be a potential G1 horse but that is for us to consider.”

Not surprisingly, Paulele has firmed from $10 into $7.00 in Ladbrokes’ All-In Coolmore market, while he can be found at a similar $8.00 quote in The Everest.

Overpass, who turned in an eye-catching effort for fourth, can be found at $34.00 for the Coolmore.

The 2021 All-In Coolmore Stud Stakes market, courtesy of Ladbrokes, can be viewed here.