The bookies are tipping the form from down south to stack-up at Rosehill Gardens on Saturday with Toorak Handicap winner I’m Thunderstruck heading markets for the third edition of the $7.5 million Golden Eagle (1500m). 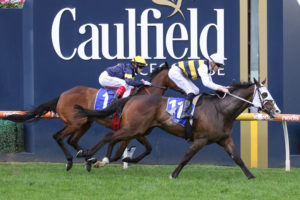 A capacity field of four-year-olds face off in this season’s Golden Eagle race and the latest odds at Ladbrokes.com.au have the Mick Price & Michael Kent Jnr. trained son of Shocking, I’m Thunderstruck, as the $4.80 favourite.

A winner of five of his eight starts to date, I’m Thunderstruck was narrowly beaten when a half-length third two back in the Group 1 Sir Rupert Clarke Stakes (1400m) before his three-quarter length victory over Tofane in the Group 1 Toorak Handicap (1600m).

He goes up notably in weight from 52kg to 57.5kg at set weights for his first Sydney assignment, but looks to have the class and ability.

Following the official Golden Eagle field and barrier draw announcement earlier in the week, there are currently only two other runners at single-figures with Joe Pride’s Epsom Handicap winner Private Eye ($7) and the John O’Shea-trained import Maximal ($10).

He could come into 14 should all four emergencies fail to gain a start.

Private Eye presents fresh for the Golden Eagle having his first run since a narrow upset in Randwick’s Group 1 Epsom Handicap (1600m) on October 2, but has been kept fit with a subsequent barrier trial.

There is an international flavour to this year’s Golden Eagle line-up with the best fancied of the internationals being Maximal, the ex-European now with John O’Shea.

In an early blow ahead of his Australian race debut the Galileo entire drew the far outside barrier for jockey Sam Clipperton to overcome, but the bookies are keeping him safe in betting.

The other two imports looking to steal the show are prepared by Annabel Neasham who is hoping to turn her luck around after the sensational race morning scratching of favourite Zaaki from last Saturday’s $5 million Ladbrokes Cox Plate.

Neasham heads to Sydney to watch the first-up runs of Group 1 Prix Jean Prat winner Laws Of Indices and Reve De Vol in the Golden Eagle, the new stablemates drawn barriers 19 and 7 respectively.

“We have only had a short time to get to know these two horses so I suppose you could say it is a bit of guess work,” Neasham told The Daily Telegraph this week.

“But they are both sound, working well and haven’t missed a beat.

“Laws Of Indices is a Group 1 winner over 1400m and a lot of his form is on soft ground.

“But he did run fifth beaten two and a half lengths behind Poetic Flare in a (Irish 2000) Guineas trial on a good track.

“He has got really good form and although he has never run over 1500m, he is a quality horse.

“He is coming back in trip for the Golden Eagle but on his work he seems quite sharp.

“I think he also has slightly better form on soft ground but he has been placed in a Group 2 on a good track over a mile.

“He is reasonably versatile and if they go quick that will help him as he has a good turn of foot.”

One of the big winners in the Golden Eagle barrier draw was Queenslander Apache Chase, the Desleigh Forster-trained Better Than Ready gelding to jump from gate six with Jim Byrne aboard chasing a hat-trick of wins.

Aim is the better fancied after the Star Witness gelding’s first-up $500,000 Silver Eagle victory over 1300m at Randwick on October 9.

Co-trainer Peter Snowden remains wary of both the favourite and the internationals in the Golden Eagle, but still rates Aim a genuine chance to complete the double.

“There’s a few internationals there that we don’t know much about,” he told the media this week.

“It’s one of those intriguing races where it’s hard to marry up all the form.

“And we don’t know much about I’m Thunderstruck in Sydney.

“I’m happy with our bloke, he won the Silver Eagle quite well.

“He gets good ground, which he likes. He’s a bit older now and a bit tougher.

“He worked really good this morning so he’s going into it in good shape.”