Forgot You will get his chance to win the 166th edition of the stallion-making Victoria Derby on Saturday and potentially secure a start in the Group 1 $8 million Lexus Melbourne Cup field just three days later. 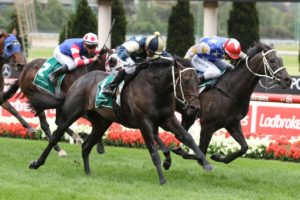 A capacity field of three-year-old stayers do battle in the elite staying test that is the Group 1 $2 million Penfolds Victoria Derby (2500m) at Flemington this weekend as the Melbourne Cup Carnival gets underway.

Two of the youngsters are dominating the Victoria Derby odds at Ladbrokes.com.au with last start winners Gunstock and Forgot You battling for favouritism.

The Savabeel colt is drawn well in gate eight for jockey Daniel Moor and on Monday was the sole three-year-old among the 35 fourth acceptances taken for Tuesday weeks’ Melbourne Cup.

He is currently last on the Melbourne Cup order of entry equal 30th with five other horses, but would be a strong chance to back-up against the older horses in the ‘race that stops a nation’ should he win Saturday’s Derby.

The danger this weekend hails from the in-form stables of Mick Price & Michael Kent Junior who saddle-up the narrow favourite Gunstock from out wide (19).

The favourite is bred to win being a son of late Kiwi stallion Tavistock out of a Zabeel mare, the same pedigree that produced recent Derby champions Tarzino (2015) and Johnn Get Angry (2021).

“We’ve had so much luck with him (sire Tavistock),” co-trainer Kent Jr told News Corp this week.

“When they’re out of a Zabeel mare, it’s just dynamite.

“We actually tested his speed genes several months ago and he (Gunstock) showed he was a real stayer.

“From then on we trained him that way.

“He’s just kept going the right way and for a horse that looks like he will get the 2500 (metres), he has got a turn of foot and that’s what makes him most effective.

“I think the horse is going great and I have no qualms on him getting the trip.”

Gunstock is joined in the line-up by stablemate Jungle Magnate in gate five with Luke Currie aboard, the progressive Tarzino gelding coming off a third to Forgot You in the Vase.

With 10 of the past 19 Victoria Derby winners being out of the Vase, it is certainly a nice form-line for Jungle Magnate who presents potential value in the Group 1 at 20/1.

“You don’t have to be the winner of the Vase to be winning a Derby,” Kent Jr said.

“It’s usually the horse that is running on nicely.”

Busuttin & Young ran the quinella in the Vase with tearaway leader Commander Harry nearly scoring a boilover at 100/1.

The Reliable Man three-year-old was just run down the final strides, but gets the chance to give his better fancied stablemate a scare again in the Derby lining up from a wide alley with Linda Meech retaining the ride.

Alegron will be ridden by Brett Prebble in the Derby, the hoop replacing the suspended Kerrin McEvoy who will be back in time to ride Grand Promenade in the Melbourne Cup.

The 2021 Victoria Derby is one of four Group 1 races on the Flemington card for Saturday, while the action in Sydney is headlined by the four-year-olds facing off in the $7.5 million The Golden Eagle at Rosehill.