Converge has claimed the first leg of the Australian Three-Year-Old Triple Crown with a win in Saturday’s $1 million Randwick Guineas (1600m).

The Gai Waterhouse and Adrian Bott-trained three-year-old produced a brilliant turn of foot out wide and then quickened late to fend off a challenge from short-priced favourite Anamoe.

Winning hoop Tim Clark got away beautifully from the barriers to settle forward behind the leading Military Expert, biding his time before pushing the button coming out of the turn.

Clark’s tactics proved the difference in the end, but he also thought the soft draw went a long way to improving his chances.

“He was able to draw a good barrier today and obviously I didn’t want to give that away. He likes to stalk the speed and he’s got a really explosive turn of foot but 300m sort of sees him out,” Clark told Sky Racing. 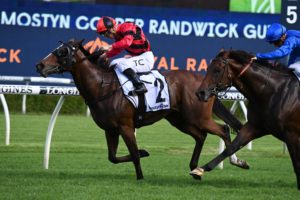 Converge will likely head to the Rosehill Guineas in a fortnight’s time for a potential rematch against Anamoe. Photo: Steve Hart.

Converge was always a serious threat out to the mile in his third run back.

The son of Frankel produced a similar late burst to win last year’s J.J. Atkins at Eagle Farm over the trip and was clearly targeted for the Guineas third-up.

His two runs prior for third in the Eskimo Prince and Hobartville Stakes were full of merit, while the stable also felt confident he could handle the heavy conditions for the first time in his career.

“I was very happy with the way the preparation has unfolded to date, knowing we were trying to get him to this race today to peak today and his next couple of runs,” co-trainer Adrian Bott said.

“It’s the first real time we have seen him under the ideal conditions and it was great to see him able to respond in the manner we know he can.”

Converge holds a nomination for the Rosehill Guineas in a fortnight’s time where he can be found as the $4.50 second-elect behind Anamoe at Ladbrokes.

Following that, a shot at the Doncaster Mile on March 26, or the Australian Derby a week later over further could also be on the cards.

“I think the natural race is to go to the Rosehill Guineas and potentially we may look at coming back to the Doncaster, the way the three-year-olds get treated and he is so electric with that turn of foot,” Bott said when asked on Converge’s immediate plans.

“I’ve no doubt he could see out a Derby trip as well, he’s just got too much class. I will discuss with the connections which way to go and we will map it out from there.”

Anamoe was seen doing his best work late for second, while the well-supported Hilal also filled the frame for third.