The Tony Gollan-trained Vega One is tipped as the in-form winter galloper to beat again this weekend when the last start Kingsford-Smith Cup champion lines-up as favourite in the 2021 Stradbroke Handicap field. 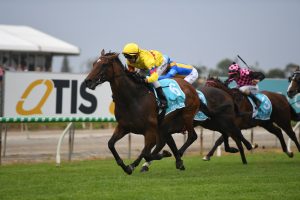 Vega One (pictured at the Gold Coast) is tipped to enjoy another Group 1 success in Saturday’s Stradbroke Handicap 2021. Photo: Steve Hart.

Queensland’s most iconic race, the Group 1 $1.5 million Stradbroke Handicap (1400m) features as the highlight on an outstanding Eagle Farm race card on Saturday and has drawn a typically strong field of middle-distance horses.

Heading the latest Stradbroke Handicap odds online through Ladbrokes.com.au is this season’s Group 1 Kingsford-Smith Cup (1300m) winner Vega One looking to do the double.

The Lope De Vega five-year-old was excellent the closing stages at the same track when the season’s premier hoop Jamie Kah came out from behind a wall of horses to snare an upset on May 29.

Prior to that Vega One was fourth to Eduardo in the Group 1 Doomben 10,000 (1200m) also at double-figures, but won’t be found at that price this weekend.

Jockey Rachel King comes aboard for the all-important ride on the punters’ pick and the pressure is on her to produce Vega One at the right time in the same vein as the gun Kah ride.

Vega One overcame gate 13 of 15 carrying 59kg to victory last time out and is now at $6.50 to make the most of his good gate four draw this weekend in the grand final.

Brisbane-based Toowoomba horseman Gollan also now has Outback Barbie lining-up in the race with the mare gaining a start as the first emergency in place of the scratched Chris Waller-trained Madam Rouge who instead contests the Group 2 Dane Ripper Stakes in the day’s final race.

Outback Barbie is at 40/1 for the upset however drawn wide (20), the Spirit Of Boom five-year-old also unplaced in eight previous runs at the track and with only two thirds from 10 1400m runs in the past.

Along with her top-fancied stablemate there are three other single-figure fancies in the current Stradbroke Handicap betting markets including the $7.50 second elect Wild Planet drawn barrier 15 for Hawkes Racing.

Tommy Berry comes aboard the Animal Kingdom five-year-old who presents as a danger second-up having been kept fit since the close Doomben 10,000 second on May 15 at 25/1.

With history against the Stradbroke favourites and a strong recent record in the race by horses drawn out wider, there’s plenty to like about Wild Planet to further frank the Doomben 10,000 / Eduardo form.

The other best fancied are The Harrovian ($8.50) in barrier 11 with Glen Boss aboard the Toby & Trent Edmonds-trained Doomben 10,000 third placegetter and the top weight Mr Quickie ($9.50) prepared by Phillip Stokes.

Fastnet Rock seven-year-old The Harrovian boasts a flawless two-from-two record at Eagle Farm ahead of Saturday’s feature and also has strong 1400m form (6:4-1-0) as he looks to hand the stable back-to-back wins.

Team Edmonds won last year’s Stradbroke Handicap with Tyzone (2020) and if successful this Saturday will be the first stable to take out consecutive editions of the event since Con Karakatsanis with two-time hero Black Piranha (2009-10).

Mr Quickie may be giving the weight away to his rivals in the Stradbroke, but the in-form son of Shamus Award brings in some very nice Melbourne form into the race and has ace hoop James McDonald in the saddle from barrier one.

The 2021 TAB Stradbroke Handicap is scheduled to run as Eagle Farm Race 8 at 3:53pm (AEST) as the penultimate event on Saturday’s race card in Brisbane.