The money is coming for co-trainer Gai Waterhouse to secure her third success in the Group 1 J.J. Atkins with Converge the firm favourite to take out the mile feature for two-year-olds at Eagle Farm on Saturday. 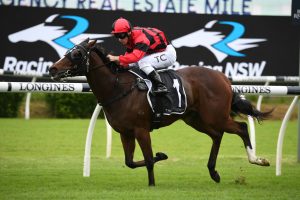 Converge is one of the top fancied two-year-olds in Saturday’s 2021 J.J. Atkins field in Brisbane. Photo: Steve Hart.

Tulloch Lodge trainers Waterhouse and Adrian Bott saddle-up two of the fourteen juveniles facing off in this year’s $1,000,000 J.J. Atkins (1600m) including the top fancy Converge.

Stablemate Volcanic Rock is a 20/1 outsider in J.J. Atkins betting at Ladbrokes.com.au despite the son of Hinchinbrook’s good lead-up win at the track in the Listed The Phoenix (1500m) last weekend.

“His win in The Phoenix was a good effort for a horse still improving and it will be interesting to see how he handles the step up in class,” Bott told Racing Queensland.

The diminutive but classy Converge is at the other end of the markets at $3.40 to claim the final Group 1 juvenile race of the season, the progressive Frankel gelding drawn a treat in barrier five.

“Converge is quite a small horse and he’d be just over 15 hands but he’s got a very big heart,” Bott said.

“He was a bit unlucky in the Sires’ when he got further back than we expected and his options were limited.

“He got caught in an awkward position on the home turn but he did well to make up so much ground.”

Clark has ridden the youngster for all six career starts to date including a previous win over the 1600m distance in Sydney’s Listed Fernhill Handicap in April.

He was at double-figures fresh in that traditional J.J. Atkins lead-up and is now the one to beat, tipped to turn the tables on his last start conqueror after a huge run from out wide (barrier 15) in the Sires’.

Favourites have a strong recent record in the J.J. Atkins with six saluting since 2014, most recently Rothfire ($3.50) last year for Brisbane’s Robert Heathcote.

The Richard & Michael Freedman-trained Tiger Of Malay was good in the lead-up win with Craig Williams aboard and has the same hoop in the saddle as the Extreme Choice colt chases the double last completed by Sizzling (2012).

Port Louis meanwhile was only a half-length back third after making up ground from barrier 16, 99-time Group 1 winning jockey Hugh Bowman with work to do again on the Ciaron Maher & David Eustace-trained Maurice colt who has barrier 13 in the Group 1.

Bott declared Port Louis as the biggest danger to Converge in Saturday’s rematch, but still believes the bookies have the market right.

“I think Port Louis is probably our biggest danger but Hugh (Bowman) might have to wait another day for his next big win,” he said.

Waller currently holds the training record in the J.J. Atkins having prepared three past champions: Pressday (2010), Press Statement (2015) and The Autumn Sun (2018).

Last Saturday’s Group 1 Queensland Oaks winning trainer Edward Cummings – great-grandson to the late Bart Cummings – got a taste of elite level success for the first time thanks to Duais and is looking to continue that form with two JJ Atkins hopes in Dark Rebel and Three Wise Men.

The 2021 Treasury Brisbane J.J. Atkins is scheduled to run as Eagle Farm Race 7 at 3:13pm (AEST) on Saturday’s race card.