Annabel Neasham’s runaway Doomben Cup champion Zaaki is the in-form winter galloper to beat again with the horse at an odds-on quote to claim the inaugural $1.2 million The Q22 (2200m) at Eagle Farm on Saturday. 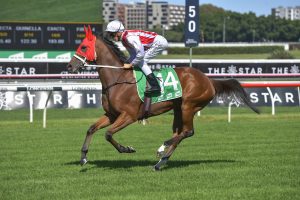 Toffee Tongue (pictured) is considered the danger to Zaaki in Saturday’s 2021 The Q22 in Brisbane. Photo: Steve Hart.

A newly revamped feature on the Stradbroke Handicap Day card in Brisbane, The Q22 weight-for-age showdown replaces the race formerly known as the Eagle Farm Cup / P.J. O’Shea Stakes and there’s a huge prize up for grabs.

There are fourteen remaining hopefuls in the hunt for the $720,000 first prize after the unfortunate early withdrawal of the Toby & Trent Edmonds-trained Vanna Girl (4) due to a foot abscess and Quick Thinker (12) also coming out without any rain around in Brisbane to take the sting out of the track for the Kiwi.

The scratchings have only further cemented the winning hopes of the red-hot favourite Zaaki, the British-bred son of Leroidesanimaux into $1.50 through Ladbrokes.com.au.

The horse chases his third win on the trot having backed up from his good win at the Gold Coast in the Group 2 A.D. Hollindale Stakes (1800m) to blitz his rivals with the seven-length demolition job in the Group 1 Doomben Cup (2000m) on May 22.

Zaaki has been kept fresh since that huge performance and should easily run out a strong 2200m here facing a similar class of rivals with James McDonald aboard again.

“He pulled up superb. He went to the paddock for a week and just got ridden at the beach each day. His is work has been very good since then.

“On Tuesday morning he was very fresh. He did a good gallop. He is full of himself and that is what you want to see with an older horse … to be enthusiast and full of life coming to the end of a prep.

“In the Doomben Cup, he was basically in a race of his own. From the top of the turn, l Iooked behind him and everything was off the bridle and he just skipped clear of them like they were maideners, which was extraordinary given that they were good horses.

“I can’t see why he is not going to turn up in the same form he was three weeks ago.

“Win, lose or draw he will go to the paddock for a short break after Saturday.”

The obvious danger occupying the second line of The Q22 markets in the rematch is Chris Waller’s distant Doomben Cup runner-up Toffee Tongue ($11).

The Tavistock four-year-old has suffered an early blow drawing out wide however (15) and will need to be putting in a career best performance to close that gap on Zaaki from last time out.

Two last-start winners are the others tipped most likely to finish in the money behind the already-declared Zaaki with Warning ($14) and Spirit Ridge ($16) drawn well in barriers six and two respectively.

Former Victoria Derby hero Warning has been competitive in plenty of top staying events over the past two years including his Group 1 SA Derby (2500m) third to Russian Camelot last year.

He returned to the winners’ stall last time out on May 15 at Doomben with a narrow win in the Group 3 Chairman’s Handicap (2000m) carrying 58kg and will eat-up the extra metres this weekend.

The Mark Newnham-trained Spirit Ridge also brings in some rich form to The Q22 with the Nathaniel six-year-old having run second in the Listed Wagga Wagga Gold Cup (2000m) before scoring a tight victory over Carif in the Group 3 Premier’s Cup (2400m) at Eagle Farm.