Two of the top performing fillies out of Sydney’s ATC Oaks in April head the markets in Brisbane this weekend for an excellent edition of the Group 1 $600,000 James Squire Queensland Oaks (2200m). 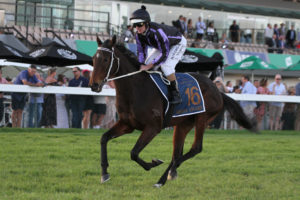 Headlining the Saturday race card at Eagle Farm, the Queensland Oaks field features 14 three-year-old fillies including Duais and Bargain who ran second and third respectively behind Hungry Heart in the Group 1 ATC Oaks (2400m) at Randwick back on April 17.

It is the third placed Bargain tipped to go two better and take out an Oaks of her own, the Mark Newnham-trained daughter of Ocean Park at $4.80 in the latest markets at Ladbrokes.com.au.

She has drawn ideally in barrier four with Joshua Parr to ride, the filly having run top three in her last three assignments.

Her latest run was at Doomben on May 22 when second to the Chris Waller-trained Only Words in the Group 2 The Roses (2000m), the key form line to follow into the Group 1 on Saturday historically speaking.

The Edward Cummings-trained ATC Oaks runner-up Duais meanwhile has a wider barrier 12 draw on the weekend and will be ridden by Hugh Bowman.

The daughter of Shamus Award enjoyed back-to-back wins including a half-length victory over Bargain in the Group 3 Adrian Knox Stakes (2000m) before her Oaks placing.

She has been kept fresh since with 49 days between runs and has genuine claims to win after she made up all the ground late over the mile and a half in the Sydney event.

The early Queensland Oaks betting market mover also now at $5.50 for the win is the Waller-trained Grace And Harmony.

She is one of a bumper six final acceptors in the Queensland Oaks field this Brisbane Winter Racing Carnival for Waller who chases his fourth win in the race in just seven years.

Waller’s previous Queensland Oaks winners are the mighty Winx (2015), Egg Tart (2017) and Youngstar (2018) who was the last filly to complete The Roses – Queensland Oaks double.

The season’s most winningest Group 1 jockey down under, James McDonald, partners Waller’s Sebring filly Grace And Harmony in the Oaks having ridden her for her two latest runs.

Two back she won the Listed Gold Coast Bracelet (1800m) before her credible sixth with excuses form a wide draw in The Roses on May 22.

Things went amiss for her in the traditional Oaks lead-up right from the jump, and there’s money to suggest she can atone with a better run from barrier three in the grand final on Saturday.

The other best fancied of the Waller contingent at equal Queensland Oaks odds of $8 through Ladbrokes.com.au are The Roses winner Only Words chasing the double from a wide barrier 13 drawn and the consistent Charms Star who was eye-catching first-up when third in the same lead-up behind her stablemate.

Rounding out the single-figure hopefuls at $9 is then the flying Chris Calthorpe-trained Media Award in gate five with John Allen riding.

The progressive filly, another by Shamus Award, was very good at Morphettville on May 1 when taking out the Group 1 Australasian Oaks (2000m) at a blowout price of 60/1.

She’s being kept much safer in betting to do the double last completed by the aforementioned Waller-trained Egg Tart (2017) and is after her fourth consecutive victory.

The Queensland Oaks is scheduled to run as Eagle Farm Race 8 at 3:53pm (AEST) on Saturday’s race card in Brisbane.