Progressive three-year-old Extreme Warrior is firming Extreme Warrior favourite to continue the gun run in Adelaide for the Kent/Price stable this weekend heading markets on the Group 1 $502,250 The Furphy Goodwood (1200m). 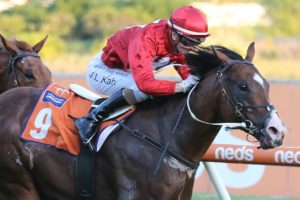 They return this weekend saddling-up their emerging Extreme Choice colt, Extreme Warrior, in a capacity The Goodwood field.

A winner of three of his seven starts to date, the up-and-comer was last seen winning the Listed Bel Esprit Stakes (1100m) first-up at Caulfield on April 23.

Following Tuesday’s final acceptances, updated The Goodwood odds online at Ladbrokes.com.au have the favourite into $5 to become the first three-year-old to win the event since the filly Lone Rock in 2011.

At the opposite end of the age and weight scale, Behemoth, is into $7.50 second favouritism in The Goodwood betting.

David Jolly’s hulking South Australian sprint star and three-time Group 1 winner in Melbourne lines-up for his fourth attempt having run second to Despatch in 2019, fourth to Trekking in 2020 and seventh last year behind Savatoxl.

He is second-up and looking to atone for his mid-field sixth fresh in the Group 3 DC McKay Stakes (1100m) at the Morphettville track where.

The six-year-old son of All Too Hard was far from disgraced that run when only just over a length beaten with 62kg and he is in on the 59kg top-weight this weekend.

An early easer in the markets out to $8 is then the in-form In The Boat, Lindsey Smith’s Nostradamus four-year-old a winner of seven of his 11 starts to date.

Boasting a perfect three-from-three record over the 1200m distance, the consistent sprinter chases a third win on the trot.

He was last seen dominating some class rivals including Brooklyn Hustle who he beat by nearly three lengths over 1100m at Sale on April 15, but suffered an early blow drawing out wide with barrier 20.

“I wouldn’t imagine a lot will change with his tactics,” Smith told the media this week.

“Deane (Lester, part-owner and form expert) wanted him drawn out better than drawn in and he knows the race better than I do.

“If he’s not upset, I’m not upset so I’ll trust his expertise.”

Rounding out the current single-figure fancies to win this season’s The Goodwood at $9 is the Cliff Brown-trained The Inferno.

With an outstanding record over the distance (9:6-1-0), the Group 1 performer was eye-catching running third only a quarter-length beaten in the DC McKay Stakes, and should relish the rise in distance here.

The returning The Goodwood champion is also back this weekend, the Tony & Calvin McEvoy-trained six-year-old having run second in the McKay last time out.

Savatoxl had 60kg that run at double figures and went down in a devastatingly close finish making him a nice value shot to go back-to-back in The Goodwood at $21.

The race’s sole emergency, three-year-old Manhattan Times coming off a third in the Group 2 Tobin Bronze Stakes, has gained a start with the scratching of Chris Waller’s dual Group 1 winning mare September Run (18).