The three-year-old colt by Japanese stayer Maurice was the easing $3.30 favourite on Day 1 of The Championships after taking out the Australian Guineas first-up at Flemington over the mile.

Hitotsu also joined rare company by becoming the first horse since Mahogany in 1994 to win both the Victorian and Sydney Derby – an accomplishment that has arguably placed him alongside some of the greatest three-year-olds in the sports history.

Racing on a genuine heavy track for the first time was the knock on Hitotsu leading in, but Ciaron Maher said after the race that the stable was always confident.

“He probably put the writing on the wall about a month before the Guineas that he was in better shape than what he was two weeks before the Derby. That gave us a lot of confidence going into the Guineas,” Maher told Sky Racing. 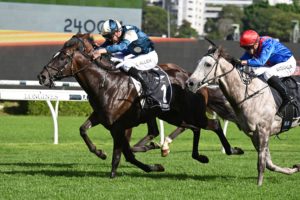 Hitotsu will return to the paddock to prepare for a crack at this year’s Ladbrokes Cox Plate at The Valley. Photo: Steve Hart.

The pace was set early by Castlereigh Kid in the 2400m staying classic before Hitotsu flexed his muscle down the straight.

John Allen strode up out wide rounding the turn and went toe-to-toe with Benaud, who was racing on the short backup after finishing fourth in Monday’s Tulloch Stakes at Newcastle.

Punters were left with hearts in mouths as the pair brushed the leader Alegron over the final furlong, but the bump wasn’t enough to bother Hitotsu on his way to an impressive half-length win.

Only two runs into his prep, the smart young three-year-old could take his place in next week’s Queen Elizabeth Stakes, but Maher went on to say that a trip back to the paddock to get him right for the spring is in order.

“We are fair to him, he is fair to us. We will get him ready for a Cox Plate now, he doesn’t need to race the older horses. As you can see he is still furnishing and we’ll take them on in the spring,” Maher said.

Benaud finished off well for second, while Alegron held on for third despite getting wayward down the straight.

Wet track specialist Forgot You finished well down the straight just behind the well-backed Regal Lion.