History was made at Royal Randwick on Saturday as Gary Portelli’s impressive two-year-old Fireburn became the first filly since 1996 to complete the Golden Slipper – Inglis Sires’ double.

The daughter of Rebel Dane went around as the short $2.50 favourite in the 1400m Group 1 feature, and it didn’t take long for her dominant turn of foot to do the talking.

Brenton Avdulla’s ride from last to first in the Slipper was the stuff of legends, and it was another easy watch for punters that backed the pair as they raced clear at the 100m mark to win by two lengths.

The winning hoop chose to settle midfield this time around, right before cutting the corner into the turn to gun down the leader She’s Extreme.

On another wet day in Sydney, most jockeys chose to steer clear of the fence, but the proven mudlark Fireburn lapped up the heavy conditions to extend her unbeaten record to five in a row.

“What a filly, she just turns up week after week and she raises the bar,” Portelli told Sky Racing. 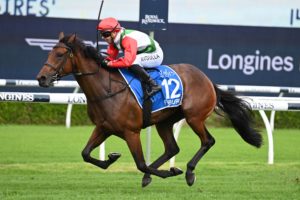 Fireburn became the first filly since Merlene in 1996 to complete the Golden Slipper – Inglis Sires’ double at Randwick on Saturday. Photo: Steve Hart.

“We set a task in the Slipper, and she proved herself. A few people were knocking her today thinking it would be a one-off thing, but they don’t do that in Slipper’s and still win. I thought today’s race wasn’t as strong as the Slipper, and it only meant she had to turn up in the same order, and all week she’s been telling me she’s ready to go.”

Fireburn stamped herself as a horse to watch winning her maiden at Randwick over 1200m late last year, and then proved that was no fluke winning on the Kensington track on New Year’s Day.

She went around at double-figure odds in the Slipper, only to produce one of the most memorable wins over the last 20 years to defeat Best Of Bordeaux and the heavily backed Coolangatta.

As for what’s next, Portelli seemed confident we’d see Fireburn in next fortnight’s $500,000 Champagne Stakes over the mile where she currently stands as the $2.20 favourite.

“We’ll see how she comes through the run, she’ll tell me over the next few days what she’s up to,” Portelli said.

“I’d like to see her over the mile and then give her a really good spell, which a lot of the Golden Slipper horses don’t really get a chance because the spring comes so quickly.”

She’s Extreme finished stuck on well to finish runner-up, the second time she’s placed behind Fireburn after running second in the Sweet Embrace Stakes in February.

Let’srollthedice found the line late for third, while Daumier battled on for fourth after settling on speed.