Nature’s Strip’s dominance in the T.J. Smith Stakes continued at Randwick on Saturday as the ‘World’s Best Sprinter’ equaled the mighty grey Chautauqua’s record with his third straight win.

It was an easy watch for punters that took the short $2.30 quote as James McDonald put paid to the rest of the field in a win reminiscent of last year’s victory in the VRC Classic at Flemington.

As expected, the well-backed Eduardo rolled forward and set the tempo before J-Mac dug his heels in at the 600m mark to take the lead. 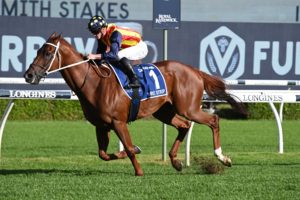 Nature Strip claimed the T.J. Smith Stakes for the third year running on Day 1 of The Championships at Randwick. Photo: Steve Hart.

The pair drew three lengths clear of the rest of the field down the straight, but it was Nature Strip who found something extra on his way to Group 1 number eight.

Champion trainer Chris Waller was emotional in the winner’s circle and even went as far as saying he thought about scratching the horse following Tuesday’s barrier draw.

“James (McDonald) said as soon as the barriers came out that the draw was perfect. I was thinking about scratching him a couple of days ago, James just said from the draw, we’ll come across, do our thing and he doesn’t have to be bustled, he can just get into his rhythm and that’s what he likes,” Waller told Channel 7.

The champion seven-year-old by Niconni has now totaled over $17 million during his career, a number he’ll look to add to when he returns to defend his own crown in The Everest during the spring, before a potential stint in the UK sometime in the near future.

“It will be up to the owners to work out where they want him to go. I’m sure the main aim is to have him back here for the Everest and if we can shoot over and see our friends at Royal Ascot it would be pretty special,” Waller went on to say.

“Everybody respects Australian racing and especially our sprinters and middle-distance horses. It would be great to take horses like him and Home Affairs over there and put that flag up pretty high.”

Eduardo stuck on well for a distant second, while Paulele made up good ground to fill the frame.