It was a nervous watch for favourite backers, but a superb ride from Tommy Berry has seen Masked Crusader salute in the Group 2 Premiere Stakes at Royal Randwick.

The Group 1 William Reid Stakes winner got into as short as $2.50 with Ladbrokes bookmakers and appeared gone for all money after missing the start.

Not for the first time though, Berry remained extra patient at the rear of the field, biding his time behind a wall of horses before the perfect gap opened up. 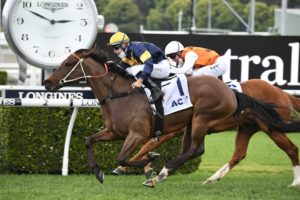 With eyes no towards the Everest, the winning hoop said there might be improvement to come.

“He sprinted very well but I tell you what he has got improvement this guy,” Berry said after the race.

“He had a good blow when I pulled up. His run sort of just started to end coming to the line. I think Hawkes’ just doing what they do making sure they are ready on the big day.”

The son of Toronado won The Heath first-up at Caulfield before copping a check last time out in the The Shorts to run fifth.

With some strong soft track form to his name though, Masked Crusader always looked likely to bounce back, and he’ll now head to The Everest in a fortnight’s time as the $5.00 second-elect (in from $7.00) behind Nature Strip.

The Hawkes-trained five-year-old has now won six of his seven starts over 1200m, but Berry thinks he’ll need the right run.

“He is definitely going to need luck in The Everest the way he races but that is why he doesn’t win every time. When he gets his luck he’s always there,” Berry went on to say.

Second place-getter Standout, meanwhile, lived up to his namesake after making up big ground along the rails to find the money.

Embracer was equally brave finding the line, while the same can’t be said for Rothfire, who failed to produce his best finishing four lengths off the winner.

This year’s All-In The Everest market, courtesy of Ladbrokes, can be viewed here.