The Godolphin colours saluted in Saturday’s Group 2 Danehill Stakes at Flemington, only it wasn’t the horse we all expected greeting judge the first.

Lightly raced colt Kallos led for most of the way to win the three-year-old sprint, enjoying a brilliant ride from Fred Kersley to upstage stablemate, and race favourite, Ingratiating.

The son of Medaglia d’Oro was a last-start maiden winner by a big margin at Hawkesbury but went largely undetected in the market despite running a place in the Listed Festival Stakes down the Flemington straight last prep.

Much like his first-up run, Kersley was happy to roll forward and found himself with plenty of horse left underneath as the pair kicked clear at the 250m mark.

The $12.00 boil-over has caused some serious movement in Ladbrokes’ All-In Coolmore Stud Stakes market, with Kallos now installed as an $8.00 chance. 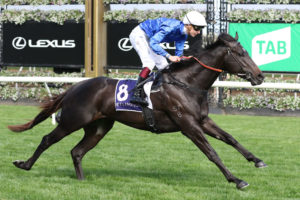 Kallos’ price in the Coolmore has been slashed to single figures following his win in the Danehill. Photo: Ultimate Racing Photos.

“We always had a bit of an opinion of him,” Godolphin stable representative Reg Fleming told Racing.com.

“He was a bit unlucky in his first start at Moonee Valley, and then he ran really good up the straight here in the next race, so James (Cummings) thought he’d bring him here today and give him a go at this.”

Ingratiating, meanwhile, was among several top chances that got back and failed to run on.

The three-year-old won the Vain Stakes two back at Caulfield, but now finds himself on the drift in Coolmore betting from $5.00 favouritism out to $11.00.

General Beau did well to fill the minors with a nice late run. He’s now firmed from $17 into $15, while last start winner Bruckner can be found at a similar quote after running third.