Ladbrokes’ own Peter Moody found himself back in the Group 1 winner’s stall at Flemington on Saturday, courtesy of his latest acquisition, Incentivise.

The five-year-old gelding out of Shamus Award led all the way to win the $1 million Makybe Diva Stakes over the mile, extending his winning streak to seven in his first run back from a spell.

Previously in the care of Steve Tregea, Incentivise was saddled by Brett Pebble for the first time on Saturday, a move that proved to be the difference as the pair found something extra down the straight to fend off race-favourite Tofane and a late charge from Mo’unga and Sir Dragonet.

Incentivise stamped himself as a horse to watch this spring with a very successful maiden campaign up in Queensland, and is now among the favourites to win some of the Carnival’s top races later in the year. 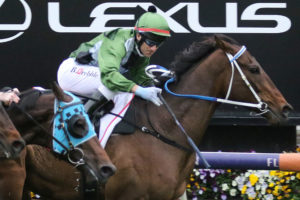 Incentivise continued his rise through the ranks with an all-the-way win in Saturday’s Makybe Diva Stakes at Flemington. Photo: Ultimate Racing Photos.

Moods said after the race that he hasn’t had much time to get to know the horse, but he expects there’s plenty of scope for improvement.

“It was a very good effort, he didn’t look comfortable at any stage, I don’t think he get onto his right leg,” Moody told Racing.com.

Nice improvement to come, wasn’t probably the way we intended to go about it, but I just sort of left that up to Brett. As we’ve seen, the further he gets into a race he builds nicely, and even though they got to him you knew he was going to keep going.”

Moody will now target the $1 million Turnbull Stakes (2000m) back at Flemington on October 2 before lining up in either the Caulfield Cup, or even the Melbourne Cup not long after.

I think it’s very encouraging at this stage of the spring. We’ve only got one more run before the Cup, which will probably be the Turnbull, so time to build on it and hopefully we can get him on his Melbourne leg at some stage,” Moody went on to say.

Winx Stakes winner Mo’unga was brave as always winding up from well back to run a narrow second.

Meanwhile, Sir Dragonet showed he’s also in for another bring spring after making up huge ground to run third in his first run back.

Not surprisingly, Incentivise will go into the Turnbull as the $4.60 second-elect to Zaaki in the Turnbull, while he’s also firmed from $7.00 into $5.00 with Ladbrokes bookmakers ahead of the Caulfield Cup.

Click here for Ladbrokes’ All-In Turnbull market, and here for the Caulfield Cup.