Star mare Verry Elleegant is red-hot favourite to finally come away with a win in the Group 1 $1 million George Main Stakes (1600m) in her third attempt at the Royal Randwick showdown. 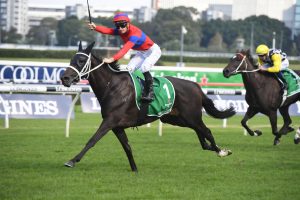 Verry Elleegant is odds-on to win the 2021 George Main Stakes at her third attempt on Saturday. Photo: Steve Hart.

The daughter of Zed ran fourth to Avilius in 2019 and fourth again to stablemate Kolding in last year’s George Main Stakes results, trainer Chris Waller hoping it is third time lucky for the now six-year-old on Saturday.

“The simple fact is, her Group 1 record is superior to most,” Waller told Just Horse Racing this week speaking to the mare’s recent record of 11 top-two placings from her past 13 Group 1 starts.

“She either wins or runs second and she’s got that class factor. Yes, there’s other Group 1 horses in the race but it’s clear to see they’re not as consistent as her.

“It looks a lovely race for Verry Elleegant. Her first-up run was terrific and she has trained on nicely since then.”

She resumed in the Group 1 Winx Stakes (1400m) narrowly failing to defend her title there first-up when second behind subsequent Makybe Diva Stakes runner-up to Incentivise last weekend, Mo’unga.

The punters are now rallying behind the mare to atone and salute in a nine-horse George Main Stakes field this weekend from her favourable barrier two draw with James McDonald retaining the ride.

Verry Elleegant is odds-on in the latest George Main Stakes betting markets paying $1.90 at Ladbrokes.com.au to hand Waller his eighth victory in the race.

Verry Elleegant is one of four Waller-trained runners in this year’s race along with the reigning champion Kolding, Vinery Stud Stakes / ATC Oaks double winner from the autumn Hungry Heart and Star Of The Seas.

“He’s just that type of horse and he’s drawn to get a lovely run.

“We’re going into the race with a pretty good hand.

“They’ve all performed at the highest level and they’re all in their mature years but still racing very well.”

Along with three-time Group 1 winner and inaugural Golden Eagle champion Kolding ($9.50) in gate four with Tim Clark riding, the only other single-figure hopeful in the mix is the Kerry Parker-trained George Ryder Stakes winner from the autumn Think It Over ($4.50).

Nash Rawiller continues associations with the So You Think six-year-old after riding Think It Over to a second-up victory in the Group 2 Chelmsford Stakes (1600m) at the track and distance on September 4.