Lightly raced Godolphin colt Anamoe proved his class at Kembla Grange on Saturday, defying a late drift in the market to win the Group 2 Run to the Rose first-up from a spell.

The three-year-old out of Street Boss was seen for the first time since winning the Sires’ Produce Stakes at Randwick earlier in the autumn and raced every bit like a $3.50 chance with James McDonald back on board.

After the pair combined for Group 1 glory earlier in April, it was another case of too good too late as McDonald found daylight out wide to wear down the leading In The Congo just before the line.

“He has a tremendous will to win this horse,” McDonald said. “I knew once he was in his eyesight (of the leader) he would get him. It took a lot of work to get there. I could feel one coming down my outside, not too sure what it was but it actually spurred him on a bit.”

A trip to the Group 1 Golden Rose Stakes in a fortnight’s time at Rosehill is next on the cards, and it is no surprise to find Anamoe firming from $3.60 into $2.10 with Ladbrokes bookmakers after his brilliant three-length win in the Sires’ Produce over the same journey. 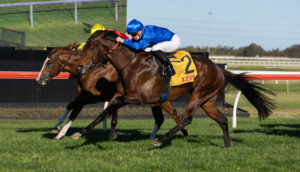 Anamoe (James McDonald, all blue) trained by James Cummings wins the Run To The Rose (Group 2) at Kembla Grange on Sepetember 11, 2021 – photo by Martin King/Sportpix copyright.

While the $1 million feature looks well within his grasp though, Godolphin and connections seem to have bigger things in mind.

“We’re looking to go out in trip to seven (furlongs) and a mile and it was great that James was able to let the race unfold when there was speed up front and the horse just gets mobile and gets into his gorgeous action and he savaged the line like a horse that is ready to go right on with it,” winning trainer James Cummings said when asked on what’s next.

Although he hasn’t raced beyond 1400m, Anamoe has now firmed into a $10 chance in the Everest on October 16, and a $14.00 chance to run in the Ladbrokes Cox Plate at The Valley a week later.

In The Congo set the tempo for much of the race on Saturday and stuck on well for second.

Meanwhile, Remarque, who was backed into late $3.10 favouritism, found the line well to run third coming off a freshen-up.

The 2021 Golden Rose Stakes market, courtesy of Ladbrokes, can be viewed here.