The next big thing in Australian racing, Zaaki, is set to dominate a small field of just six runners at Caulfield Racecourse on Saturday as the red-hot favourite in the Group 1 $1,000,000 Neds Might And Power (2000m). 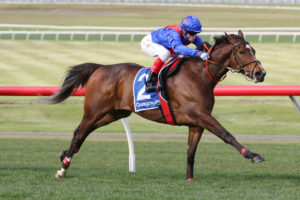 Formerly registered as the Caulfield Stakes, the evet is a key lead-up into the Australasian weight-for-age championship – the Group 1 $5,000,000 Ladbrokes Cox Plate (2040m) held at The Valley on October 23.

Annabel Neasham’s imported Leroidesanimaux seven-year-old Zaaki is already odds-on at $1.80 through race sponsor Ladbrokes.com.au to take out this year’s Cox Plate and he is tipped to pick up another Group 1 win on the way on Saturday.

He officially chases a sixth consecutive win and is two-from-two this prep with wins in the Group 2 Tramway Stakes (1400m) first-up in Sydney and the Group 1 Underwood Stakes (1800m) at Sandown last start.

His Underwood victory was excellent and saw him defeat the Jamie Richards-trained mare Probabeel by two lengths.

She is the predicted runner-up again in Saturday’s rematch with Zaaki at $1.24 and firming in Might And Power Stakes betting, while Probabeel is paying $6.50 to score an upset and record her fourth career Group 1.

Brett Prebble retains the ride on the rails-drawn Probabeel, while Craig Williams sticks with Zaaki in gate four as both hoops chase their first success in the event.

Neasham is confident Zaaki is fit and ready to fire third-up in the Underwood Stakes, despite his tendency to “lay in” the Melbourne way of racing.

“All the signs are good for Zaaki as he chases his third Group 1 win,” Neasham wrote for The Advertiser.

“He’s naturally just kept improving and you will see on Saturday that he’s now looking even better in the coat.

“He does still lay in a bit going the Melbourne way, although that doesn’t really worry me.”

Homesman at $12 is the third elect for the Might And Power Stakes this season, while Grahame Begg’s Naturalism Stakes winner at the track and distance last time Nonconformist has his Caulfield Cup tune-up in the Caulfield Guineas Day support act.

Evergreen eight-year-old Homesman shapes-up as a potential value bet, the Anthony & Sam Freedman-trained Australian Cup winner from the autumn having his third run against Zaaki.

He was a distant ninth at the Gold Coast in the Group 2 A.D. Hollindale Stakes (1800m) before finishing an improved second at Eagle Farm in the Group 2 The Q22 (2200m) over the winter.

This prep the son of War Front has had just the one lead-up when second carrying 60kg to Secret Blaze (54kg) in the Group JRA Cup (2040m) at The Valley.

As for the Caulfield Cup-bound Rebel Raider five-year-old Nonconformist runs in a non-traditional lead-up instead of the Group 2 Herbert Power Stakes (2400m) on the same day and Begg is happy with how the horse is ticking over ahead of his Grand Final on October 16.

“It gave him a nice break of three weeks between runs and broke up that two weeks, two weeks cycle,” Begg told Just Horse Racing this week.

“I think getting that extra week has been really beneficial.

“He had a bit of an easy week after the Naturalism before upping the ante in the last week-and-a-half.

“He galloped well on the course proper on Tuesday at Caulfield in company and I’m really happy with the way he’s going.”

The 2021 Might And Power Stakes is set to run as Caulfield Race 6 at 3:10pm (AEDT) on Saturday’s bumper 10-race Caulfield Guineas Day card.