In-form and lightly-weighted four-year-old I’m Thunderstruck is the one to beat in Saturday’s Group 1 $1 million Toorak Handicap (1600m) getting up to a mile on Caulfield Guineas Day. 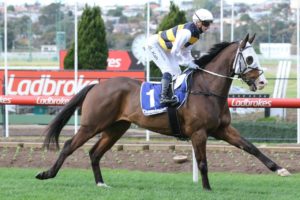 One of three elite level races on the card in Melbourne, this year’s Toorak field features 14 hopefuls but just three are currently under double-figures for the win through Ladbrokes.com.au.

Leading betting at $2.80 after a favourable barrier four draw is Mick Price and Michael Kent Junior’s progressive son of Shocking, I’m Thunderstruck getting in on just 52kg.

He had the same weight on his back when Jye McNeil piloted him to a very close third behind Sierra Sue only a half-length beaten in the Group 1 Sir Rupert Clarke Stakes (1400m).

That event has been the form race to follow into the Toorak Handicap in recent years and I’m Thunderstruck is tipped to frank the form again after doing it tough from barrier 16 of 16 in the lead-up.

Looking to be the first to complete the Sir Rupert Clarke Stakes – Toorak Handicap double since Trust In A Gust (2014), the Trent Busuttin and Natalie Young-trained mare Sierra Sue is at 10/1 in betting.

She jumps from barrier 11 looking to continue her strong Caulfield strike-rate but has a big ask rising from 52.5kg to 56kg after winning the Group 1 last time out.

The other best out of the Sir Rupert Clarke Stakes engaged in Saturday’s rematch is the French-bred runner-up Dice Roll for Nick Ryan.

The Showcasing seven-year-old went up in grade fresh for the Sir Rupert and was outstanding at 25/1 going down a nostril flare in a blanket finish thanks to a brilliant ride by Fred Kersley.

Kersley retains the ride on Saturday with the duo drawn well with the inside alley and rated $9.50 to get the job done.

The other runner under $10 to upset I’m Thunderstruck is the New Zealand visitor Elephant for Emma-Lee and David Browne.

He continues associations on Shocking five-year-old Elephant, the galloper having been defeated just once in his seven career starts when second at The Valley at weight-for-age narrowly beaten in the Group 2 Feehan Stakes (1600m).

A first-up winner down under at Caulfield in mid-August, Elephant was back in winning form last start on Underwood Stakes Day when saluting for the punters in the Group 3 Sandown Stakes (1500m).

Back up to a mile at Caulfield and dropping from 58.5kg to 55.5kg, the Kiwi shapes up as a genuine threat with co-trainer David Browne full of confidence heading into the horse’s first shot at Group 1 glory.

“He should be better for the run at Caulfield,” Browne told Punters this week.

“Hopefully there won’t be too much rain because he’ll be at his best on a good track.

“He’s just got that bit extra on the really good ground.”

His conqueror in the Feehan, Superstorm for Danny O’Brien is among the longer-priced dangers ($13) after running a brave third behind superstar Zaaki in the Group 1 Underwood Stakes (1800m) over a furlong further last start.

The 2021 Toorak Handicap is set to run as Caulfield Race 9 at 5:10pm (AEDT) as the penultimate event on the bumper 10-race card.