An unbeaten record goes on the line in the $1 million Group 1 William Reid Stakes (1200m) under the lights at The Valley tonight with the Ciaron Maher & David Eustace-trained Marabi odds-on to keep her flawless run intact. 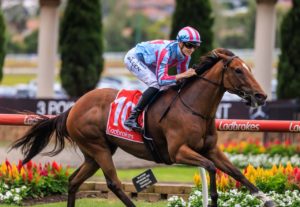 Set to run as Moonee Valley Race 7 at 9:15pm (AEDT), the weight-for-age William Reid Stakes looks to be Marabi’s for the taking if the markets are anything to go by.

The five-year-old daughter of I Am Invincible took her record up to seven-from-seven last time out rising in grade to easily account for her rivals with a dominant Group 1 Oakleigh Plate (1100m) win at Caulfield on Blue Diamond Stakes Day.

She has been kept fresh since and returns to The Valley tonight for the first time since her nearly three-length Group 2 Australia Stakes (1200m) victory in late January chasing her fourth win at the course.

Marabi should also be improving back up to the six furlongs having won four-from-four over the 1200m.

Flamberge (2016) was the last horse to complete the Oakleigh Plate – William Reid Stakes double and the odds at Ladbrokes.com.au on Marabi to be the next are short at $1.70.

Ben Allen retains the ride on the exciting sprinter who still has improvement to come making her a hard-to-beat favourite according to co-trainer Maher.

“She galloped yesterday, and the reports are all good and she’s pulled up well, she’s on track for this weekend,” Maher said on SEN Track’s Bensley.

“Ben Allen knows her quite well and he reckons it was her best and nicest piece of work and the nicest she was moving the gallop before the Oakleigh Plate and she’s in a similar spot.

“She’s obviously very fit and her gallops are the only indication and she’s in good order.

“Marabi will be hard to beat.”

The Maher/Eustace stable originally had three final acceptors in the William Reid Stakes field but the early scratching of their last start Group 2 Rubiton Stakes winning Capitalist colt Marine One has depleted their contingent.

Maribi will still be joined by stablemate Generation drawn a treat in barrier two with Jamie Kah to ride the smart Snitzel colt.

Yet to finish out of the money in his seven starts and proven at Moonee Valley, Generation is the early William Reid Stakes market mover heavily backed in from $26 to $10 to challenge the stable’s star.

Marine One (13) is one of two scratchings from the million-dollar sprint with The Inferno (7) also out due to sore foot in a major blow for Mornington trainer Cliff Brown.

A genuine Moonee Valley specialist, Snapper has won four-from-five at the track and finished second in his other start at the notoriously tight course.

The latest on March 18 was by nearly five lengths with 59.5kg and on the quick back-up he presents as a fit danger and potential value at $41.

Maribi is so dominant in betting that no other runner in the near capacity field is under double-figures.

The only other runners outside of her and Generation rated any kind of winning hope by the bookies are the rails-drawn Newmarket Handicap runner-up The Astrologist ($12), Chris Waller’s third place-getter in the same Super Saturday lead-up September Run ($13) chasing her first victory since the 2020 Coolmore Stud Stakes and Kemalpasa ($15) coming off a first-up win.