The bookies are tipping the Godolphin-raced Colette to bounce back and post her first win of the year on a Heavy Randwick track in Saturday’s Group 1 $1 million Queen Of The Turf Stakes (1600m) in Sydney. 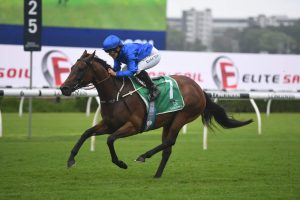 Colette is one of the top fancied mares in Saturday’s 2021 Queen Of The Turf Stakes at Randwick. Photo: Steve Hart.

It’s currently a Heavy (10) track with more rain on the radar ahead of Day 2 of The Championships and the money is coming for the proven mudlarks across the card.

That includes the versatile James Cummings-trained Hallowed Crown mare Colette who presents fit fourth-up in the Queen Of The Turf Stakes.

She boasts three wins from five previous Heavy track starts including the ATC Oaks on this day back in 2020 and her thrilling $7.5 million Golden Eagle at Rosehill defeating Icebath that October.

Her latest victory was at Flemington in the spring’s Group 1 Empire Rose Stakes (1600m), Colette looking to return to her best on Saturday.

After an eighth when still under three lengths off the mighty Verry Elleegant two back in the Group 1 Chipping Norton Stakes (1600m) at this track and distance on a Heavy (10), she was last seen running a brave second to the impressive Forbidden Love in the Group 1 George Ryder Stakes (1500m).

Colette and James McDonald reunite on Saturday and the mare ticks plenty of boxes as the firm $3.90 favourite through Ladbrokes.com.au.

The Queen Of The Turf favourite put the writing on the wall for a big run on Saturday when galloping alongside her seven-length Rosehill Guineas winning stablemate Anamoe at the stable’s Osborne Park facility on Tuesday morning.

“She’ll get her toe into the ground and she’s ready for a big performance (in the Queen of the Turf).

“I think she’s going to run a lot better than she has at her past few.

“To the casual observer, you might think she’s looking for 2000m this preparation but there’s a lot of rain forecast for the latter end of this week.

“Some of them are going to have their stamina sapped by those conditions and that’s going to suit Colette. We’ve got her very fit at the culmination of her preparation. That second in the George Ryder is going to look like pretty good form.

“She’s already an Empire Rose winner and that second behind Forbidden Love, who was game in running fourth in the Doncaster. That’s going to look like good form for this race.”

Despite the 18-horse line-up there are only two other runners currently at single-figures in Queen Of The Turf Stakes betting this year with Brad Widdup’s stable ace Icebath ($6) and the undefeated Ciaron Maher & David Eustace-trained Yonce ($6.50) drawn opposite ends of the field in barriers 15 and one respectively.

Inaugural $2 million The Invitation winner from the spring, Sacred Falls five-year-old Icebath ran ninth to Zaaki in Flemington’s $5 million The All-Star Mile (1600m) two back on a Good (4) before an improved run back in Sydney last weekend.

She became a two-time Doncaster Mile place-getter after a second last year and third to Mr Brightside this season, under a length beaten here at big odds on Day 1 of The Championships.

Icebath goes up in weight back against her own kind at weight-for-age and this looks her best chance to finally secure her long overdue Group 1 trophy.

Yonce is the unknown in the mix, the four-year-old daughter of Proisir six-from-six to date in easier company ahead of both her Sydney and Heavy track debut in the Queen Of The Turf.