We’re in for a wet edition of the Group 1 $2 million Schweppes Sydney Cup (3200m) on Day 2 of The Championships on Saturday and it is a two-horse betting battle between Stockman and Crystal Pegasus. 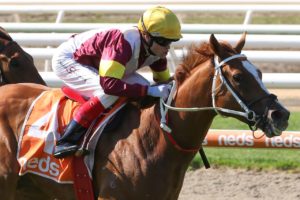 Mornington Cup winner Crystal Pegasus is one of the favourites in the 2022 Sydney Cup over two miles at Randwick this weekend. Photo: Ultimate Racing Photos.

The Randwick course proper is currently rated a Heavy (10) meaning it is time for the mudlarks and more dour stayers to put their hands up in the two-mile classic on the card.

At time of publish, the Joe Pride-trained Stockman is into $5 favouritism in Sydney Cup betting at Ladbrokes.com.au drawn out in gate 13 for jockey Alysha Collett.

The son of Tavistock is a genuine wet-tracker with such good form on Heavy going (7:4-2-0) and gets conditions to suit with just 51kg in the event.

While his Randwick strike-rate leaves a bit to be desired, he was solid at Rosehill winning the Group 3 Sky High Stakes (2000m) two back and ran fourth with 59kg behind Duais in the Group 1 Tancred Stakes (2400m) at Newcastle last time out.

He was beaten a big margin by the class mare there, but comes back 8kg for the Sydney Cup and looks brings in the strongest form lines.

The danger is the airborne Crystal Pegasus for Chris Waller, the British-bred Australia gelding chasing his fifth win on the trot and coming out of a trio of Melbourne races.

Winner of the Listed Roy Higgins Quality on Slow going over 2600m two back by a runaway five lengths, the two miles looks a non-issue for the classy chestnut.

His latest run was on top of the ground in the Listed Mornington Cup (2400m) where he posted an easy win with 56kg and he is well-weighted with 51kg here drawn out wide in gate 18 for Jamie Kah.

Waller has an outstanding recent Sydney Cup record preparing five winners since 2014 and three of the past four including last year’s champion Selino.

Along with the second elect, the master horseman saddles-up a further four runners in this season’s Sydney Cup field with: Sheraz ($13), last start Group 3 Queen’s Cup winner in the wet No Compromise ($12), Queen’s Cup runner-up Surefire ($10) and third in the same Rosehill lead-up from March 19 Chalk Stream ($9.50).

The Gai Waterhouse & Adrian Bott-trained Knights Order ($10) is drawn the rails looking to go one better than his close third behind upset winner Nerve Not Verve in last Saturday’s Group 2 Chairman’s Quality (2600m), while The Chosen One ($14) carries the 56kg top-weight.

Third at his last three starts both here and across the Tasman, the New Zealand raider The Chosen One comes off the Tancred Stakes placing and represents Cambridge-based duo Murray Baker & Andrew Forsman.

The galloper gives all the weight away and is out to be the first Sydney Cup winner since Mourayan (58kg in 2013) to carry more than 55.5kg to victory.

For value, the roughie to watch could be the Phillip Stokes-trained Sweet Orange four-year-old Daqiansweet Junior ($26) coming off a Group 2 Adelaide Cup (3200m) win over the distance with 56.5kg.

He comes back to 51.5kg with his penalty and has three-time Melbourne Cup winning hoop Kerrin McEvoy aboard from barrier seven.