Hitotsu is out to make the history books once again backing-up from a win fresh in the Australian Guineas as the punters’ pick heading north for the Group 1 $2 Bentley Australian Derby (2400m) on Saturday. 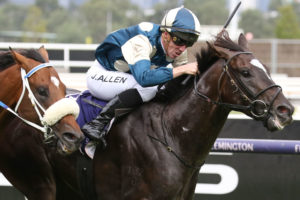 The Ciaron Maher & David Eustace-trained Maurice colt is one of a capacity field of three-year-olds engaged in this year’s Australian Derby, running over the mile and a half on a predicted Heavy Randwick track on Day 1 of The Championships.

Drawn in barrier four for jockey John Allen, Hitotsu is out to hand both stable and hoop back-to-back wins in the classic following the success of Explosive Jack last Sydney Autumn Racing Carnival.

After his rise through the ranks in the spring, which culminated with a big Group 1 Victoria Derby (2500m) win at Flemington, Hitotsu made history winning the Group 1 Australian Guineas (1600m) back at headquarters first-up.

He now looks to become the first horse to complete the Australian Guineas – Australian Derby double without a run in between and the fourth overall to win both races joining: Mahogany (1994), Gold Guru (1998) and the filly Shamrocker (2011).

Mahogany (1993/94) is also the last horse to have won the Victoria Derby – Australian Derby double that Hitotsu is out to emulate this season.

The stable has kept to the proven formula with Saturday’s favourite, Hitotsu having backed-up from a Caulfield Guineas fifth over the mile to win the VRC Derby last prep.

He again goes from 1600m to the mile and a half this weekend and sits top of the Australian Derby odds at $3.50 through Ladbrokes.com.au.

Incredibly for the Melbourne-based Allen, Saturday is his chance to secure an 11th Derby success.

He is also a two-time Tasmanian Derby winning jockey and is confident heading into the weekend.

“I just think he’s a very good horse and when you have a horse of his ability, he can do things like that,” Allen told the media this week speaking of Hitotsu going from 1600m to 2400m.

“He’s done nothing wrong in his last couple of preparations.

“He’s been trained very well but he keeps delivering on the track.”

The only query will be the likely mud track with Hitotsu having had just one run on anything worse than Good when winning the Australian Guineas on a Soft (6).

“I don’t believe I’ve ever galloped him on a really wet track.

“I have nothing to say he will or won’t handle it to be honest.”

There are two other runners under double-figures in the latest markets with Forgot You ($7) coming off a third to Anamoe in the Group 1 Rosehill Guineas over 2000m and the New Zealander Regal Lion ($7) on the quick back-up.

The Murray Baker & Andrew Forsman-trained Regal Lion was third in the Group 1 New Zealand Derby over the 2400m across the Tasman in early March before his eye-catching second in Monday’s rescheduled Group 2 Tulloch Stakes (1850m).

The Tulloch Stakes traditionally runs over 2000m at Rosehill, but with last Saturday’s Tancred Stakes Day meeting a wash-out, it was postponed and held over the amended distance at Newcastle.

There will be just five days between it and the Derby now for Regal Lion and the Godolphin-raced winner Character who also backs-up as a $10 chance to complete the double.