Chris Waller’s The Everest hero Nature Strip makes his much-awaited return to racing at Flemington on Saturday in a stellar edition of the Group 1 $1 million Black Caviar Lightning (1000m). 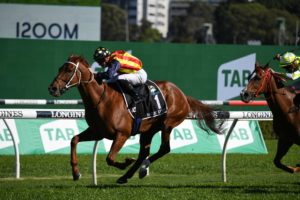 Nature Strip is short-priced favourite to return with a 2022 Black Caviar Lightning win at HQ this weekend. Photo: Steve Hart.

Looking to became the event’s first multiple winner since the three-peat of the race’s now namesake Black Caviar (2011-13), Nature Strip is at short odds to successfully defend his title first-up in Saturday’s Flemington feature sprint.

Last seen annihilating his rivals down the ‘straight six’ at HQ with a runaway three-length victory in November’s Group 1 VRC Classic (1200m), the now seven-year-old son of Nicconi will take the power of beating in the Black Caviar Lightning.

Up against a host of familiar rivals, most of which he has previously put away with ease, the classy chestnut has a brilliant first-up record (8:4-2-0) and is a genuine Flemington specialist (8:6-1-0).

While many of the other final acceptors will be better over the six furlongs or further as their autumn’s progress, the 1000m fresh is also ideal for Saturday’s deserving favourite who is a nine-time winner from 15 runs over the distance.

Current Black Caviar Lightning markets at Ladbrokes.com.au have Nature Strip at $2.60 to win from barrier six with last year’s winning jockey Ms Jamie Kah coming back aboard for the prized ride in the now million-dollar showdown.

When Home Affairs came up against his star stablemate in the world’s richest race last October, he could only manage to run ninth in the $15 million The Everest (1200m) but at Flemington he looks a genuine place chance.

The last three-year-old Lightning Stakes winner was Fastnet Rock back in 2005 and the other youngster taking on the more seasoned sprinters this year is market mover Profiteer ($8.50) for Mick Price and Michael Kent Jnr.

A nicely-bred son of Capitalist, the colt is undefeated at Flemington having won both his previous starts at the track and was last seen winning here with more weight over the 1000m on Melbourne Cup Day.

The 2022 Black Caviar Lightning Stakes is set to run as Flemington Race 7 at 4:25pm (AEDT) on Saturday’s nine-race card at HQ.