The money is rolling in for the Godolphin-raced Caulfield Guineas hero Anamoe to return to winning form second-up as the odds-on favourite in Saturday’s Group 2 $400,000 Hobartville Stakes (1400m). 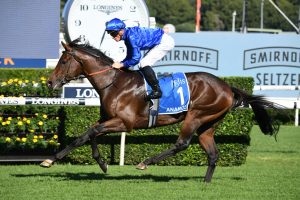 Anamoe is odds-on to win the 2022 Hobartville Stakes second-up at Rosehill on Saturday. Photo: Steve Hart.

The Sydney Autumn Racing Carnival lead-ups continue at Rosehill Gardens this weekend with the actioned headlined by a stellar field of Randwick Guineas-bound three-year-olds in the Hobartville Stakes field.

Currently the line-up is down to 11 runners with four early scratchings, most notably the James Cummings-trained Victoria Derby runner-up Alegron who instead races in Melbourne’s Group 3 CS Hayes Stakes (1400m).

Cummings still saddles-up the hot favourite in Street Boss colt Anamoe who is into $1.75 in Hobartville Stakes betting at Ladbrokes.com.au.

After an outstanding spring that concluded with that heartbreaking second behind State Of Rest in the $5 million Ladbrokes Cox Plate (2040m) at The Valley, the gun youngster resumed on January 29.

Short-priced for his first-up run, Anamoe finished under a length back third and was far from disgraced in the Group 2 Expressway Stakes (1200m) against an open-age field.

He remains in Sydney this weekend second-up and fitter for the run looking hard to beat getting out over 1400m in the Hobartville Stakes back against his fellow three-year-olds with the race’s five-time winning jockey Hugh Bowman coming aboard for the prized ride.

“He is going to be much better suited up to seven-furlongs and it’s going to look really good for him at set weights back against the three-year-olds,” Cummings told Just Horse Racing this week.

“He’s come on beautifully since the run. We have stuck to our program with him and I’m really pleased with the way he has trained on so well and he has been problem-free heading into the Hobartville.

“It is pretty important to lay good groundwork for what’s going to be a big campaign ahead of him.”

Long-term Cummings has his eye on some pretty big prizes and rivals later in the autumn with Anamoe who is being set for a clash with Melbourne Cup heroine Verry Elleegant in Randwick’s Group 1 $4 million Queen Elizabeth Stakes (2000m) on Day 2 of ‘The Championships’ in April.

“We are pretty keen on that race as something of a grand final for him in the autumn,” Cummings said.

“We talked about some of the options again during the week, about what might lay ahead for him in The Championships, and it is looking more and more likely that the Queen Elizabeth will be the race.

“In the short-term, we just have to be quite confident that we have got him right this weekend and make sure that everything sails along smoothly before we saddle him up for this Group 2.”

The biggest “threats” in the Hobartville this weekend according to the bookies are the Gai Waterhouse & Adrian Bott-trained duo of Converge ($6) and Silent Impact ($7) both drawn wide in double-digits.

Group 1 winner of Brisbane’s J.J. Atkins over a mile in the winter, Frankel gelding Converge is also second-up off a Sydney placing having run a strong third narrowly beaten behind Paulele with 60kg in Randwick’s Group 3 Eskimo Prince Stakes (1200m) on February 5.