Michael Moroney‘s now three-time Group 1 winner Tofane made history as just the third mare in history to complete the Stradbroke Handicap – Tattersall’s Tiara double thanks to her dominant win in the latter at Eagle Farm to close out Group 1 racing for the season. 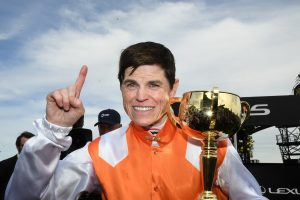 Craig Williams (pictured in Melbourne) enjoyed his sixth Group 1 win for the season aboard Tofane in the 2021 Tattersall’s Tiara. Photo: Steve Hart.

After a half-length win in the Group 1 $1.5 million Stradbroke Handicap (1400m) a fortnight ago, the five-year-old daughter of Ocean Park was excellent again returning to the same track and distance for the Group 1 $600,000 Sky Racing Tattersall’s Tiara (1400m).

Despite going up in grade, Tofane ($3.50) jumped favourite in the season’s final Group 1 race and was given a gun ride by her Stradbroke winning hoop Craig Williams.

Williams loomed up on the outside of front runner Dame Giselle approaching the home turn, before urging Tofane out five or six off the rail to charge to the line with room out wider.

The mare responded well and was far too good for her rivals over the final furlong, running off with a one and three-quarter length victory over the Chris Waller-trained Sapphire Stakes winner Nudge ($17).

“She travelled sweetly for me,” Williams told Sky Thoroughbred Central.

“I just had to convince her to come a little bit wider.

“It’s very easy to ride a horse in the form that she’s in and with her ability.”

For Williams it was his 65th career Group 1 win and his sixth this season, while Moroney enjoyed elite level win number 62.

Tofane again rewarded connections’ decision not to sell her at the recent Gold Coast Broodmare sales, and joined Dane Ripper (1997) and Srikandi (2015) as the only mares to do the Stradbroke – Tiara double.