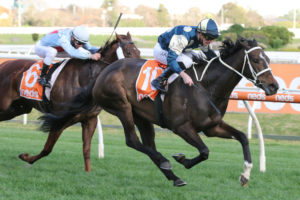 Last Melbourne Spring Racing Carnival the Trent Busuttin & Natalie Young-trained daughter of Darci Brahma enjoyed a win in Flemington’s Group 2 Blazer Stakes over 1400m and she relished getting out over that distance again in the P.B. Lawrence to beat a quality field.

She was brought on fitness wise three weeks ago with a trip to Mildura where she carried a big weight (59kg) to an over two length victory in the Listed Mildura Cup (1400m).

Boasting the fitness edge over her rivals in tougher grade back in the big city, the five-year-old was ridden confidently by John Allen.

“That little trip to Mildura has brought this filly on,” co-trainer Young told the media after the race.

“It’s a fantastic ride by John.

“She’s come out today and she’s really got that turn of foot back.”

Allen took Sierra Sue out three wide no cover once on the straight as the punters’ pick and two-time Group 1 winner over 1400m at Caulfield, Streets Of Avalon, led.

The favourite faded in the final furlong however dropping out to run eighth, just as Sierra Sue bolted home down the outside showing a strong turn of foot to take out this year’s P.B. Lawrence Stakes by a length and a quarter in 1 minute and 23.12 seconds.

In a photo for the minor placings the Hawkes Racing-trained Angel Of Truth, whose latest win was back in the 2019 ATC Derby, was huge late at 30/1 coming from well back to take out second first-up.

Holding for third in a brave performance off a wide on-speed run throughout was then Red Can Man ($8) for David Brideoake.

“You can’t win Group 1s unless you’re in them and there’s a Memsie in a couple of weeks,” she said.

“So, we’ll have a talk to the owners and see how she pulls up obviously, but I’d love to see her back here in a couple of weeks.”

Regal Roller back in 2004 was the last galloper to complete the P.B. Lawrence Stakes – Memsie Stakes double.