The Ladbrokes Cox Plate market was turned on its head at Caulfield on Saturday as the short-priced favourite Zaaki went down without a fight in the Group 1 Neds Might and Power.

The dual Group 1 winner was installed as an unbackable $1.20 favourite with Ladbrokes bookmakers in the small field five, only to come undone against Jamie Richards’ classy mare Probabeel in just her second start at weight-for-age.

The daughter of Savabeel finished runner-up to Zaaki a fortnight earlier in the Underwood at Sandown but was given a peach of a ride from the in-form Brett Pebble, who scored his third Group 1 win of the spring.

With No Effort living up to his namesake and setting a slow tempo early, Zaaki was forced to settle three-wide, a spot that saw him over-racing early on.

The tempo certainly didn’t suit Craig Williams’ ride, but it proved to be ideal for Probabeel as Pebble stoked up the now four-time Group 1 winning mare out wide to win a head-bob over the fast-finishing Nonconformist right on the line. 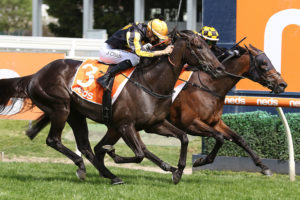 “I went a nice enough clip, and then obviously Homesman put the pressure on from about the 650m,” Pebble told Racing.com.

“I was left a bit flat-footed and I didn’t particularly like the position I was in, but we were dealt barrier 1 so I had to deal with it.”

Pebble didn’t hold back after the race, saying that he had a few queries around the favourite, particularly on a firm track.

“I was really concerned about Jordan Childs’ horse (Nonconformist) today, I liked the way it won and on a firm track too, I was a bit negative about the favourite today on a firm track and I was right.”

As for his ride, he credited the trainers, as well as Probabeel’s enormous determination to keep battling.

“It was all guts, the last 100m she was out, she had nothing left. Every time I kept asking her to keep lifting, she couldn’t, but she kept trying her heart out and it was great,” Pebble added.

Probabeel’s step up to weight-for-age came with an eye towards the Cox Plate in a fortnight’s time where she has now firmed from $21 into the $8.00 second-elect.

Zaaki can still be found as short as $2.70 (out from $1.80) with bookmakers obviously willing to give him a mulligan.

Second place-getter Nonconformist, meanwhile, will return to the races next Saturday on the quick backup to contest the $5 million Caulfield Cup.

“Obviously we’re going into the Caulfield Cup next week, and I think that run was outstanding today,” trainer Grahame Begg said.